March is Workplace Eye Wellness Month, and personal protection equipment (PPE) isn’t laughable when thousands of people are blinded, injured, or killed each year from accidents that could have been prevented or minimized if appropriate PPE had been used. 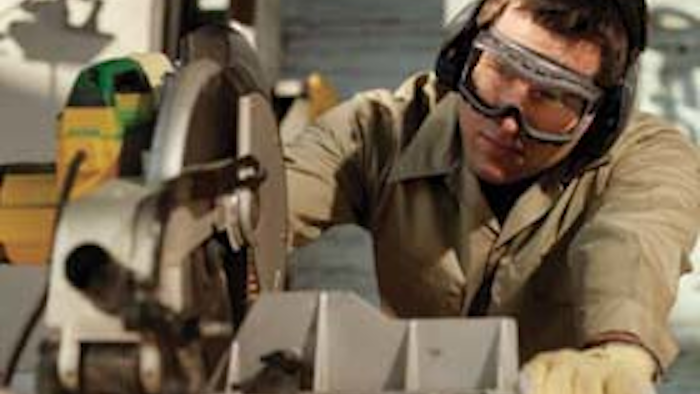 “You’ll shoot your eye out kid,” Santa replies in the 1980s movie classic A Christmas Story, when Ralphie asks for a Red Ryder BB gun for Christmas. That phrase has become synonymous with eye safety in a joking manner. In reality, personal protection equipment (PPE) isn’t laughable when thousands of people are blinded, injured, or killed each year from accidents that could have been prevented or minimized if appropriate PPE had been used. According to OSHA, eye injuries alone cost more than $300 million per year in lost production time, medical compensation.

At the end of A Christmas Story, after receiving the Red Ryder BB gun, and going outside to shoot it, a BB ricochets back at Ralphie and knocks his glasses off which protected his eyes. The glasses end up getting stepped on in Ralphie’s confusion—a small price to pay to avoid a serious eye injury. The ironic foreshadowing of Ralphie’s potential eye injury is not uncommon.

When it comes to workplace safety, words of caution from the experienced follow us into adulthood, for good reason. An employee of a contract safety glasses program began warning his eighteen-year-old son who installs siding on houses, to wear safety glasses while working. After much discussion the son finally began wearing safety glasses after he started getting aluminum dust in his eyes. A week later he began using an air powered staple gun to apply the siding. During that first week he fired a staple, which hit a metal plate behind the siding, ricocheting back to his face. One leg of the heavy duty staple hit the son’s safety glasses’ lens with such force that the frames cracked and he received bruising on his eyebrow and cheekbone. An eye saved and the willingness to take PPE seriously sets an example for others to follow.

Listen to your teacher

Edward Bernacki, a professor of medicine and chair of a joint committee on health, safety, and the environment at Johns Hopkins University, tells each trimester’s new students a story on eye safety. Bernacki explains that a graduate student working in the lab chose not to wear eye protection. Following a lab explosion, he suffered permanent blindness and was unable to work in the lab again. “There are only so many things in life you can control, but [wearing eye protection] you can. Just taking that one extra step to wear PPE can make a major difference in your life” explains Bernacki.

Barry Weatherall worked for a plumbing and heating company in Alberta, Canada more than 15 years ago. Today he spends his time telling his story to thousands of industrial workers across Canada, on how he lost his eyesight. In the hopes of inspiring change in the common “it-won't-happen-to-me” attitude, he leads 90-minute interactive workshops on eye safety in the workplace. Weatherall’s life-altering story starts after he was on the job and received incorrect information from a chemical company about the risk involved in neutralizing sulfuric acid with another chemical called caustic soda bead.

Weatherall was wearing personal protective equipment, including safety glasses, a face mask, and gloves while performing his work. After he finished neutralizing the chemicals and believed that there was no longer a risk of explosion he left to remove his PPE. His life changed forever when he went back to check on the chemicals, without putting his PPE back on. A chemical explosion occurred which left Weatherall permanently blind. Eye contact with chemicals make up 20 percent of eye injuries. Flying particles, a combination of flying or falling objects or sparks striking the eye, account for 70 percent of total injuries.  “Companies can train people until they’re blue in the face, but once the worker is on the job-site by himself, it’s up to that worker to take the time to be safe” he said. The program’s intention is to provide workers with an intense and entirely new perspective on eye safety.

OSHA estimates that 90 percent of eye injuries can be prevented through the use of proper protective eyewear. The Bureau of Labor and Statistics (BLS) reported that 50 percent of workers injured while wearing eye protection felt that their injuries had been minimized, but half of those same workers felt that another type of protection could have reduced their injuries even more. You can learn more about all types of PPE with thisinfographic, or request a free guide to PPE requirements for your type of work.

A version of this story originally appeared on DuraLabel.com.