The results of the quarterly MAPI Survey on the Business Outlook point to a period of deceleration for manufacturing, a strong pillar in the U.S. economic recovery. 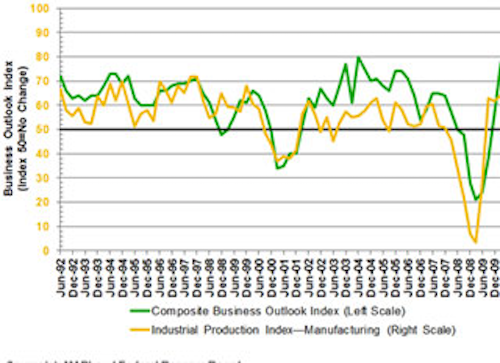 The results of the quarterly Manufacturers Alliance for Productivity and Innovation (MAPI) Survey on the Business Outlook—June 2012 (EO-110) point to a period of deceleration for manufacturing, heretofore a strong pillar in the U.S. economic recovery.

The survey’s composite index is a leading indicator for the manufacturing sector. The June 2012 composite index fell to 61 from 65 in the March 2012 survey. Despite the decline—its eighth straight since reaching a record high of 81 in June 2010—the index remains well above the threshold of 50, the dividing line that separates contraction and expansion.

“While the rate of decline was relatively slow from June 2011 through March 2012, the drop in the current quarter equals the decrease in the June 2011 survey, when it also fell by four points from its previous level,” said Donald A. Norman, Ph.D., MAPI Senior Economist and survey coordinator. “Unsurprisingly, the Non-U.S. Prospective Shipments and Non-U.S. Investment Indexes registered the sharpest declines, showing the effects of the Eurozone recession and the slowing growth in China.”

The Composite Business Outlook Index is a weighted sum of the Prospective U.S. Shipments, Backlog Orders, Inventory, and Profit Margin Indexes. In addition to the composite index, which reflects the views of 57 senior financial executives representing a broad range of manufacturing industries, the survey includes 13 individual indexes that are split between current business conditions and forward looking prospects.

The Export Orders Index, which compares exports in the second quarter of 2012 with the same quarter in 2011, fell significantly, to 63 in the current survey from 79 in March.

The Backlog Orders Index, which compares the second quarter 2012 backlog of orders with that of one year earlier, fell to 58 from 71 in the March report.

The Current Orders Index, based on a comparison of expected orders in the second quarter of 2012 with those in the same quarter one year ago, declined to 70 in June from 77 in the March survey.

The Capacity Utilization Index, based on the percentage of firms operating above 85 percent of capacity, dropped to 35.2 percent in June from 40.0 percent in March but remains above the long-term average of 32 percent.

The Profit Margin Index slipped to 68 in June from 69 in March.

All seven forward looking indexes declined but as a group still remain well above 50, the dividing line between expansion and contraction.

The Prospective Non-U.S. Shipments Index, which measures expectations for shipments abroad by foreign affiliates of U.S. firms in the third quarter of 2012 compared with the same quarter in 2011, fell to 60 in the current report from 77 in the March survey. The Non-U.S. Investment Index, based on expectations regarding capital expenditures abroad in 2012 compared to 2011, declined the same, to 60 in the June report compared to 77 in March.

The Interest Rate Expectations Index was 51, down from 62, continuing the sentiment that longer-term interest rates are expected to rise by the end of the third quarter of 2012.

The Annual Orders Index, based on a comparison of expected orders for all of 2012 with orders in 2011, eased to 79 in June from 88 in March but remained at an impressive level.

The Research and Development Spending Index surveys participants regarding R&D spending in 2012 compared to 2011. The index was 72 in the June report compared to 76 in March.

The Prospective U.S. Shipments Index, which reflects expectations for third quarter 2012 shipments compared with the third quarter of 2011, dropped to 75 in June from 77 in the previous report. The U.S. Investment Index is based on executives’ expectations regarding domestic capital investment for 2012 compared to 2011. The index was 73 in June, down slightly from 74 in March.

In a supplemental section, participants were queried on the growing trend of sustainable business practices within manufacturing.

Sixty-three percent of the respondents reported that their companies have formally adopted sustainable business practices and another 7 percent indicted that there are plans to do so.

Companies have formally or informally adopted a wide range of sustainable practices. Energy management and use strategies are the most common practices, cited by 81 percent of the respondents, followed by corporate recycling, mentioned by 71 percent. Just over one-third (34 percent) indicated that their companies engage in carbon management or have set carbon emission goals.

Despite the fact that most companies have adopted sustainability business practices, just 25 percent produce a stand-alone sustainability report and another 4 percent include a summary of sustainability practices in their annual report. Sixty-two percent do not report on such activities.

MAPI’s Composite Business Outlook Index (see chart below) is a historically accurate near-term preview of business prospects for the manufacturing sector and is a leading indicator of the Federal Reserve’s industrial production index.

The Manufacturers Alliance for Productivity and Innovation (MAPI), founded in 1933, contributes to the competitiveness of U.S. manufacturing by providing economic research, professional development, and an independent, expert source of manufacturing information. Website: www.mapi.net.