The aeroshell system, designed and built by Lockheed Martin Space Systems, will protect the Curiosity during its deep space cruise to Mars and descent through the atmosphere to the planet. 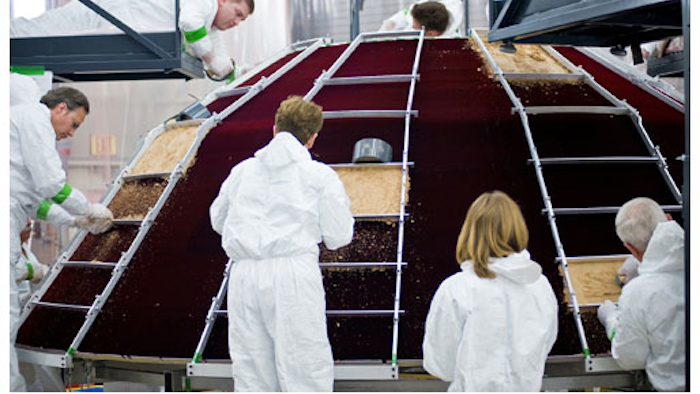 When the Mars Science Laboratory reaches the ­Red Planet this year, Trelleborg microspheres will be on board to provide protection as the rover ­Curiosity passes through the planet’s atmosphere.

The U.S. space agency’s most ambitious Mars mission to date is hurtling through space on its way to a planned landing on the planet in August 2012. The National Aeronautics and Space Administration launched the Mars Science Laboratory (MSL) in November 2011. The effort involves landing a large mobile laboratory, the rover Curiosity, on the planet’s surface. To get there, the rover must survive the descent through the Martian atmosphere, a process that generates profound heat and friction.

That’s where Trelleborg comes in. High-performance glass microspheres from Trelleborg have been specified by Lockheed Martin for use in the composite aeroshell system of the Curiosity. The aeroshell system, designed and built by Lockheed Martin Space Systems, is a blunt-nosed cone that encapsulates and protects the Curiosity during its deep space cruise to Mars and in its descent through the atmosphere to the planet. The capsule measures 4.5 meters (15 feet) in diameter, is the largest Martian mission capsule to date, and includes a composite load-carrying structure as well as a thermal protection system.

“Due to their high thermal resistance and lightweight, customizable properties, Trelleborg Eccospheres have served as a critical raw material component utilized in ablator, insulation and adhesive systems for spacecraft design since the dawn of the U.S. space program,” says Will Ricci, Aerospace Sales Manager for the Eccospheres. “We were a critical supplier to the NASA Space Shuttle program.

“With the MSL, the most ambitious Mars mission to date, it was imperative that the aeroshell was designed and built to withstand the demanding Martian atmosphere without fail,” he continues. “As such, Lockheed Martin decided to make Trelleborg’s Eccosphere glass microspheres a part of their mission’s critical backshell thermal protection system.”

Lockheed Martin provided the aeroshell to NASA’s Jet Propulsion Laboratory, which manages the MSL mission and designed and built the Curiosity. The scientific goals of the mission are to determine if the planet was ever habitable, to characterize the climate and geology of Mars and to prepare for human exploration.

The aeroshell is a two-part system. The front-facing heatshield is a phenolic-impregnated carbon ablator designed to take the brunt of the Martian re-entry, while the backshell has a super lightweight ablator (SLA-561V) material containing the Trelleborg Eccospheres as one of its ingredients. The SLA-561V ablator has flown on all of NASA’s previous Mars entry vehicles.

Trelleborg’s Eccosphere glass microspheres are hollow, thin-walled glass microspheres composed of sodium-depleted borosilicate glass. To the naked eye they resemble a fine, white, free-flowing powder, but magnification reveals them to be near-perfect spheres. They are designed to help reduce costs, enhance properties, and improve processability.

Eccospheres also have low resin interaction when compared with other glass fillers. The removal of residual broken material and highly regular particle geometry results in industry-leading strength/weight ratios, while the Eccospheres remain capable of extremely high loadings in liquid resins. Additionally, Eccospheres allow maximum versatility in composite formulations due to their low impact on resin viscosity and non-interacting chemical purity.

“The aeroshell is a vital part of the mission, forming a protective covering for the rover during the eight-month voyage to Mars,” says Rich Hund, MSL Aeroshell Program Manager at Lockheed Martin. “Its main purpose is to protect the rover and descent stage from the intense heating of entry through the thin Martian atmosphere on landing day, ensuring it can complete its important mission.”