The plant featuring a sodium reactor and molten salt energy storage system will perform better, be safer and cost less. 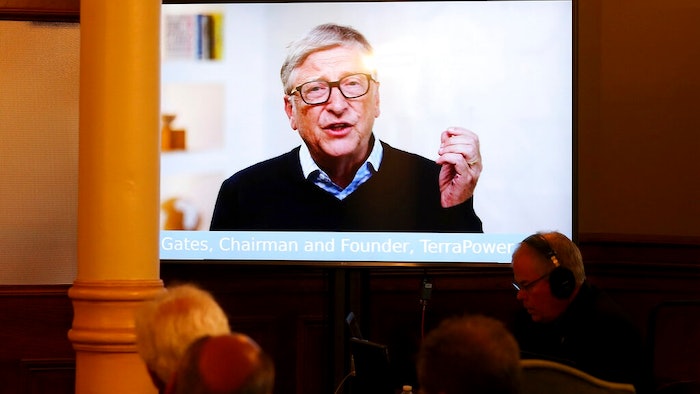 TerraPower Founder and Chairman Bill Gates speaks to the crowd in a recorded video message during the press conference Wyoming Capitol, Wednesday, June 2, 2021, in Cheyenne, Wyo., announcing efforts to advance a Natrium reactor demonstration project. "We think Natrium will be a game-changer for the energy industry," Gates said by video link to a news conference hosted by Gov. Mark Gordon. "Wyoming has been a leader in energy for over the century and we hope our investment in Natrium will help Wyoming to stay in the lead for many decades to come."
Michael Cummo/The Wyoming Tribune Eagle via AP

CHEYENNE, Wyo. (AP) — A next-generation, small nuclear plant will be built at a soon-to-be retired coal-fired power plant in Wyoming in the next several years, business and government officials said Wednesday.

Bellevue, Washington-based TerraPower is working with Rocky Mountain Power, an electric utility serving Wyoming and other Western states, to put the Natrium reactor at one of four of the utility's power plants in Wyoming, with the location to be decided later this year.

“We think Natrium will be a game-changer for the energy industry,” Gates said by video link to a news conference hosted by Republican Gov. Mark Gordon. "Wyoming has been a leader in energy for over a century and we hope our investment in Natrium will help Wyoming to stay in the lead for many decades to come.”

Wyoming is the top uranium-mining state, and the reactor would use uranium from “in situ” mines that extract the heavy metal from networks of water wells on the high plains, officials said.

Wyoming also is the top coal mining state. The U.S. coal industry has suffered a dramatic downturn over the past decade as utilities switch to cheaper and cleaner-burning gas to generate electricity.

The reactor proposal creates common ground between Wyoming, one of the most Republican states, and Democratic President Joe Biden's administration.

Wyoming is a top producer of greenhouse gases from its coal, oil and natural gas industries. The Biden administration has halted oil and gas leasing on federal lands in the West as it seeks to reduce carbon emissions by half, compared to 2005 levels, by 2030.

“The future of nuclear energy is here," U.S. Energy Secretary Jennifer Granholm said by video link. "It's got a simpler design that will hopefully result in faster construction at lower cost. It's going to create a smaller footprint. It's going to be equipped with next generation safety measures.”

If it's as reliable as conventional nuclear power, the 345-megawatt plant would produce enough power for roughly 250,000 homes. The plant also would produce hydrogen, which can power trucks and other vehicles with fuel cells.

Several coal-fired power closures are planned in the West in coming years, including some in Wyoming. A nuclear plant with hundreds of well-playing jobs, sending power over transmission lines already in place, could offset the economic blow of a coal plant retirement.

The plant will be a “multibillion-dollar project” with costs to be split evenly between government and private industry, TerraPower President and CEO Chris Levesque said.

Proposals to store nuclear waste in Wyoming have failed to pass the state Legislature in recent decades. While some waste would need to be stored on site, the plant isn't going to be a way to “solve the nation's waste problems,” Gordon said.

Gordon announced last winter he would make Wyoming carbon negative, meaning the state would capture more carbon dioxide than it emitted. Gordon is a proponent of carbon capture, or nabbing the greenhouse gas from power plant flue streams and pumping it underground. The technology has yet to be proven commercially viable on a large scale.

Gordon also has held open the possibility of suing states whose greenhouse gas goals lead to the shutdown of Wyoming coal-fired power. He continued to stand by fossil energy Wednesday.

“I am not going to abandon any of our fossil fuel industry. It is absolutely essential to our state,” Gordon said.

Fossil fuels have been a blessing and curse for Wyoming, subjecting the state to recession and population loss during low oil and gas prices and roaring booms when prices soar. The latest trend — amid coal's steady downturn and oil prices that plunged during the coronavirus pandemic — is a bust that has forced Gordon to slash state spending over the past year.

The Powder River Basin Resource Council landowner group was skeptical the reactor plan would change much.

“Wyoming’s elected leaders have still not come forward with a real plan to address lost jobs, declining revenues and the dissolution of coal communities,” resource council Chairwoman Marcia Westkott said in a statement.

Germany has long relied heavily on energy imports from Russia.
Jun 20th, 2022
Follow Us
Most Recent