It confirmed it had reached its target of reducing net debt to below $35 billion earlier than expected. 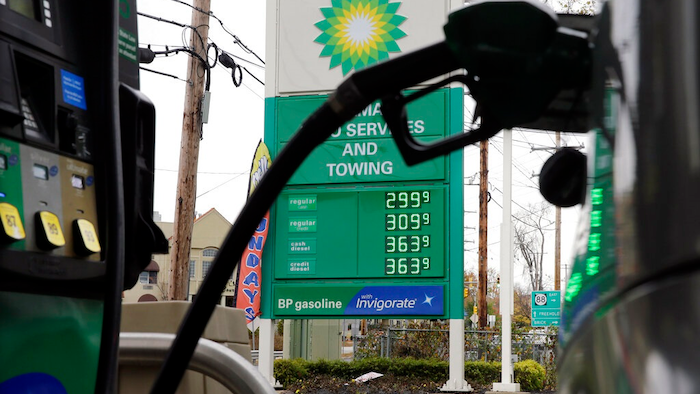 In this file photo dated Tuesday, Nov. 12, 2013, a sign at a BP filling station in Lakewood, N.J., USA. Energy company BP said Tuesday April 27, 2021, it will be returning around half a billion dollars to shareholders.
AP Photo/Mel Evans, FILE

LONDON (AP) — BP said Tuesday that it would be returning around a half-billion dollars to shareholders after “significantly” higher oil prices contributed to a big rise in profits and a reduction in debt levels.

The energy company said its underlying replacement cost profit — the industry standard that strips out one-off items — spiked to $2.6 billion in the first three months of 2021 from $791 million a year earlier. That was markedly ahead of the rise to $1.6 billion that had been the consensus in financial markets.

BP, which is seeking to transform its business to a lower-carbon future, said it will launch a $500 million share buyback program in the second quarter as it confirmed it had reached its target of reducing net debt to below $35 billion earlier than expected. Its net debt fell to $33.3 billion at the end of March against $38.9 billion at the end of 2020 on a combination of asset sales and firmer oil prices.

“With the acceleration of divestment proceeds, together with strong business performance and the recovery in the price environment, we generated strong cash flow and delivered on our net debt target around a year early," Chief Executive Bernard Looney said.

BP also announced a dividend of 5.25 cents a share for the first quarter, which is in line with the previous quarter’s payout but half that seen a year earlier.

In response to the pandemic, which sparked an oil price rout on fears over the global economy, BP last year cut its dividend for the first time since the Deepwater Horizon oil spill in the Gulf of Mexico more than a decade ago

But oil prices have been recovering sharply as the world’s biggest economies bounce back from the pandemic. The price of Brent crude rebounded to an average of $61 a barrel in the first quarter, up from $44 dollars in the fourth quarter of 2020.

“The market could not have asked for more from BP with these results," Steve Clayton, a fund manager at Hargreaves Lansdown, said. “The company has seized the opportunity of a recovery in energy prices to pay down its debts, leaving it well set for the future when conditions might not be so favorable.”