Pipeline opponents, including environmental and tribal groups, are still suing and protesting to try to block the project. 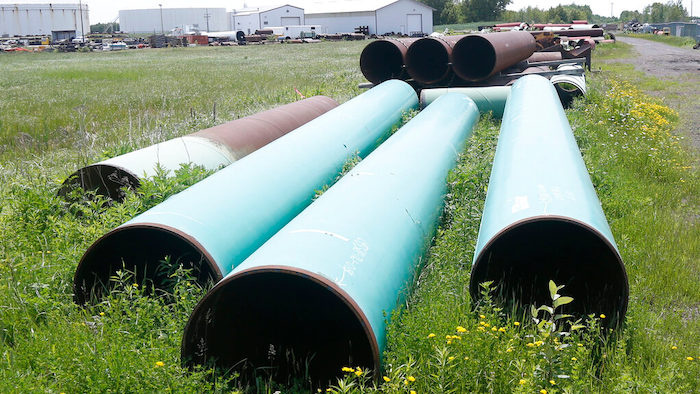 In a release from its St. Paul office, the Corps said it determined the Line 3 project “is compliant with all federal laws and regulations.” Col. Karl Jansen, commander of the St. Paul District, said the decision followed “an exhaustive review” and extensive work with federal and state regulators, Native American tribes, environmental groups and Enbridge.

"I believe our decision is based on sound science and strikes the balance between protecting natural resources and allowing reasonable development," Jansen said.

All that remains in the six-year-old process now is for the Minnesota Pollution Control Agency to issue a storm water construction permit to protect surface waters from runoff while it's being built, and then for the independent Public Utilities Commission to give a final green light. The commission has already approved the project several times.

“These permits are yet another science-based approval for the project moving Line 3 closer to the start of construction,” Enbridge said in a statement. “Final state permits and authorizations are needed for work to begin before the end of 2020.”

Pipeline opponents, including environmental and tribal groups, are still suing and protesting to try to block the project, and an appeal by the state Commerce Department is pending. But there are no injunctions in place to prevent Enbridge, based in Calgary, Alberta, from beginning construction if it gets final approval from the PUC.

Winona LaDuke, executive director of Honor the Earth, an Indigenous-based environmental group, said the opponents will keep up the fight in court.

“We're going to pursue justice. We'd like the system to work,” LaDuke said as she pulled in to view an Enbridge pipe yard in Backus. Construction preparations are well underway and workers are gathering in communities along the route, she said, raising a public health threat amid the COVID-19 pandemic.

Line 3 begins in Alberta and clips a corner of North Dakota before crossing Minnesota on its way to Enbridge's terminal in Superior, Wisconsin. Enbridge wants to replace the Minnesota section because it was built in the 1960s, and its increasing maintenance needs mean the company can run it at only half its original capacity. Replacement segments in Canada, North Dakota and Wisconsin are already complete.

Opponents say the pipeline threatens spills in pristine waters where Native Americans harvest wild rice and that the Canadian tar sands oil it would carry would aggravate climate change.

“Today’s decision is a gift by (President Donald) Trump to the oil industry and a slap in the face to the rest of us... We need a stay on construction of Line 3 so that Trump can’t rush this pipeline ahead while key legal challenges play out," Andy Pearson, Midwest Tar Sands Coordinator at MN350, said in a statement.

Enbridge says the $2.6 billion replacement will provide a safer way to transport the oil to Midwest refineries while creating 4,200 construction jobs and generating millions of dollars in local spending and tax revenues.

Democratic Gov. Tim Walz's administration has faced criticism from both sides over its handling of the project. Twelve of 17 members of an MPCA advisory group on environmental justice issues resigned after the agency approved a major water quality permit for the project Nov. 12. The Republican-controlled Minnesota Senate ousted Walz's commerce commissioner in September, after his agency appealed the PUC's most recent approval of the project. The department contends Enbridge failed to meet a statutory requirement for producing a legally adequate long-range oil demand forecast.