The commercial dispute has all the drama of a pirate movie. 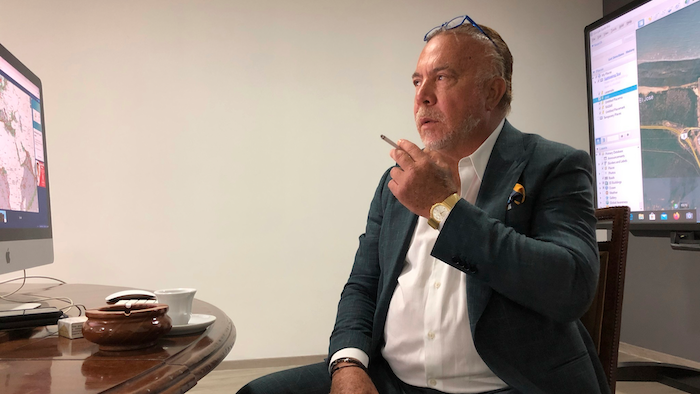 MIAMI (AP) — For two months, the Malta-flagged oil tanker Alkimos has been quietly floating off the Gulf Coast of Texas, undisturbed by the high-stakes legal fight playing out in a federal courtroom as a result of American sanctions on Venezuela.

The commercial dispute, which hasn’t been previously reported, has all the drama of a pirate movie: a precious cargo, clandestine sea maneuvers and accusations of a high seas heist.

It pits Evangelos Marinakis, one of Greece’s most powerful businessmen and owner of its most successful soccer club, Olympiakos, against a fellow shipping magnate from Venezuela, Wilmer Ruperti, who has a long history of helping the country’s socialist leaders.

Round one appears to have favored Marinakis, whose Piraeus-based Capital Ship Management Corp, operates the Alkimos. On Wednesday, federal marshals in Houston are scheduled to auction off the ship's' cargo: 100,266 barrels of high octane gasoline estimated to be worth more than $5 million. The auction is in response to Judge Lynn Hughes’ order seizing the cargo, which he said would've likely ended up in Venezuela, while arbitration over a $1.7 million lien continues.

“This clearly demonstrates that sanctions work,” said Russ Dallen, who closely monitors maritime traffic as the head of Miami-based Caracas Capital Markets. “But although this shipowner appears to have done the right thing, there are lots of other unscrupulous cockroaches in the shipping industry that won’t hesitate to do business with Venezuela."

The U.S. has been trying for months to cut off fuel shipments to and from Venezuela, hoping to accelerate Nicolás Maduro’s downfall by depriving him of the oil income that is the lifeblood of the socialist country. But so far the biggest losers have been regular Venezuelans, who are forced to wait in line for days to fill up their cars due to a lack of domestically-refined gasoline.

To date, the Trump administration has sanctioned more than 50 vessels found violating sanctions. This month it added five Iranian captains to a list of individuals blocked from doing business with the U.S. after Maduro leaned on his fellow anti-American ally to deliver gasoline that skittish commodity traders are increasingly unwilling to supply Venezuela.

The Alkimos' saga, which was pieced together from court filings reviewed by The Associated Press, began innocently enough. In late March, the Chinese-built carrier, which measures 156 meters (480 feet), was docked in Panama when it was hired to deliver the gasoline to Aruba.

But almost immediately something seemed off.

The shipping instructions indicated the cargo would be transferred at sea to another ship that had been visiting Venezuelan ports exclusively for the past year. And payent for the freight was wired from a third party, a company called Ultra Travel, which was purportedly based in Montenegro.

Moreover, ES Euroshipping AG, the Swiss-registered company that chartered the Alkimos, was owned by Ruperti, a businessman connected to Venezuela's government.

In 2002, Ruperti chartered a fleet of Russian tankers to help then President Hugo Chávez break a months’ long strike at the state-run oil company PDVSA. Now, he was trying come to the rescue again.

In March, a separate Swiss company he controls billed PDVSA for a 12 million euros advance with which he planned to purchase up to 250,000 barrels of the same 95-octane gasoline he hired the Alkimos to transport, according to a copy of the invoice obtained by the AP. To get around the U.S. sanctions, the company opened a bank account in euros and rubles at Moscow-based Derzhava Bank.

The Alkimos tanker is owned by Brujo Finance Company, a company registered in the Marshall Islands. But its operator, whose name and corporate logo is painted on the ship, is Capital Ship Management, which operates a fleet of 54 tankers.

Capital's chairman, Marinakis, is the owner of football clubs Olympiakos in Greece and Nottingham Forest in England.

In 2018, prosecutors opened a preliminary investigation against him for drug trafficking stemming from the record seizure of 2.1 tons of heroin aboard one of his vessels. He has strongly denied the charges, saying they were an attempt by the leftist government at the time to silence dissent. In the past, he also faced match-fixing charges but was later cleared.

While the arbitration between the two shipping magnates is likely to take months, U.S. officials see the case as a sign that sanctions on Venezuela are increasingly effective.

In May, the U.S. Departments of State and Treasury and the U.S. Coast Guard issued an advisory warning the maritime industry that such ship to ship transfers of the sort the Alkimos was being asked to perform are frequently used to evade sanctions. While the report focuses on Iran, North Korea and Syria—not Venezuela—it urges shippers to enhance due diligence and sanctions compliance practices to avoid running afoul of U.S. regulations

“The global shipping community is moving out of doing business with Venezuela,” Elliott Abrams, the Trump administration’s special representative for Venezuela, told the AP. “The most reputable firms, including the largest Greek shipping companies, have been cooperative and have shown that they value their reputations and their global businesses."

In the case of the Alkimos, its owners suspected something was amiss. So its lawyers pressed ES Euroshipping for additional information, pointing out that the contract contained a “sanctions clause” giving the shipowner “absolute discretion” to refuse to carry out any trade that it deems exposes it, or its crew, to U.S. sanctions.

“Just to be clear in advance. Owner WILL NOT participate in any illegal trading,” according to an email sent March 31 by the shipowner’s broker.

Despite its misgivings, the ship departed Panama on April 9 — days after the AP reported that Ruperti had started purchasing oil in what he would later describe as a “humanitarian work" that didn't violate the U.S. sanctions.

“I am 100% sure that I am doing this legally and that I am complying with the rules and obligations,” he told the AP in an April interview. He declined to comment when contacted this week about the seized cargo.

En route to Aruba, the back and forth continued—and the Alkimos' owners grew more suspicious. The rendezvous point with the other ship, the Beauty One, was located in the open seas—50 miles west of Aruba off the northern coastline of Venezuela—rather than an area designated by Aruban authorities for ship-to-ship fuel transfers. Further, the supervisor of the risky procedure, ATM Marine Services, were unknown to the ship's owners, without even a web page to identify it. No agents had been appointed to coordinate with Aruban authorities.

“URGENT responses to the above are requested. The matter is most serious,” the Alkimos' broker wrote shortly before its schedule arrival off Aruba on April 11.

Throughout the ordeal, tanker rates were surging — something that ES Euroshipping contends was driving the shipowner's rush to unload its cargo and move on to the next job. With the world economy shutting down due to the COVID crisis, there was a glut of fuel being produced. The mammoth oil carriers, which in some cases saw their daily rates jump 10-fold, were suddenly in demand as floating storage devices even as crude prices were crashing.

After two deadlines to provide alternate voyage orders passed, the Alkimos turned around on April 26 and headed to Houston. But it first advised ES Euroshipping that it would seek a lien on the cargo for $1.7 million to compensate for losses, including $500,000 in fees it racked up being adrift for so long.

ES Euroshipping contends Capital Ship Management and the ship's owners stole the cargo and is seeking damages worth $2.3 million. In court filings, attorney Michael Volkov said that that after much stonewalling by the ship owner, which refused to accept its assurances there was no sanctions risk, Euroshipping did provide alternate instructions — to take the cargo first to the Bahamas and then Trinidad.

But Ruperti’s company claims its instruction were nonetheless ignored and accused the ship owner of setting off on an illegal, 7-day voyage to Houston to find a favorable jurisdiction to legalize its “theft” when much closer ports existed for the parties — none of the U.S. nationals — to litigate their competing breach of contract claims. It also accused Alkimos of fleeing Aruban waters without notifying the harbormaster, leaving behind $11,500 in fines and fees for the unauthorized departure.

“Brujo is but a pirate who plundered cargo at sea, fled the Aruban authorities without proper authorization, diverted its vessel to a port in this District, and then deceived this Court,” Volkov said in a May 29 filing.

Ruperti appears to have some powerful backers of his own. On May 1, Hans Hertell, a former U.S. Ambassador to the Dominican Republic, wrote a letter to Ryan Patrick, the U.S. attorney for the southern district of Texas, calling on prosecutors to open a criminal probe against the shipowners.

“We were simply astounded to learn that the Vessel Owners had so brazenly stolen and converted our clients’ cargo in this manner,” according to the letter.