It was supposed to be a bipartisan moment for the Senate. 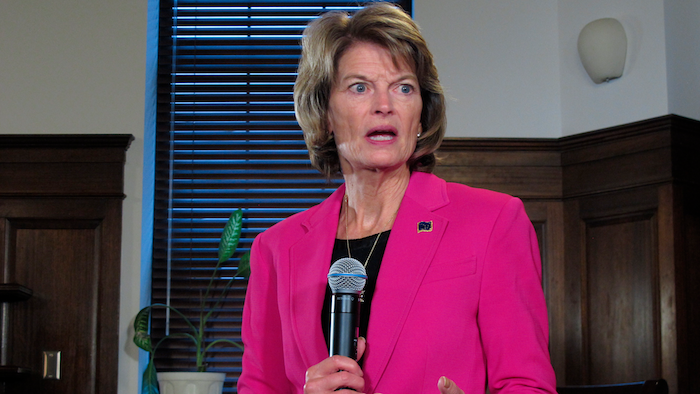 U.S. Sen. Lisa Murkowski speaks with reporters after delivering an annual speech to a joint session of the Alaska Legislature on Tuesday, Feb. 18, 2020, in Juneau, Alaska.
Associated Press

WASHINGTON (AP) — It was supposed to be a bipartisan moment for the Senate.

But now a sweeping energy package touted as a "down payment" on fighting climate change is falling apart amid a push to limit coolants used in air conditioners and refrigerators.

The energy legislation would boost efficiency and authorize billions of dollars to develop a wide range of clean energy options to limit greenhouse gas emissions that contribute to global warming. The measure also would enhance grid security and support efforts to capture and remove carbon emissions from coal and natural gas plants.

The bill is widely supported in both parties but stalled this week amid a dispute over a proposed amendment to impose a 15-year phasedown of hydrofluorocarbons, or HFCs, that are used as coolants in refrigerators and air conditioners. HFCs are considered a major driver of global warming and are being phased out worldwide.

Republican Sen. John Kennedy of Louisiana and Democratic Sen. Tom Carper of Delaware pushed for the amendment, which they said would give U.S. companies needed certainty to produce “next-generation” coolants as an alternative to HFCs. Both men represent states that are home to companies that produce the alternative refrigerants.

The Kennedy-Carper amendment is supported by at least three dozen senators, including 17 Republicans who signed on as co-sponsors. But the amendment is opposed by Senate GOP leadership, including Senate Majority Leader Mitch McConnell and Sen. John Barrasso, chairman of the Senate Environment and Public Works Committee.

Barrasso, R-Wyo., said the measure could add a layer of new federal rules on a patchwork of current or future state rules regarding HFCs. He wants language in the amendment ensuring that states will not impose stricter requirements than the federal rule.

Proponents said states are likely to adhere to the federal standard, as they have done on other environmental issues, and said language preempting state action would set a bad precedent.

With no agreement on the HFC language, the energy bill was derailed Monday night on a procedural vote, 47-44. The vote was well short of the 60 votes needed to proceed to a floor debate.

The bill's path forward was unclear Tuesday, as both sides lashed out over who was to blame.

"It is beyond frustrating to have our bill, which contains priorities from more than 70 senators, held up by an unrelated dispute that was never part of our discussions in the lead-up to this floor process,'' said Sen. Lisa Murkowski, R-Alaska, who co-sponsored the bill with Sen. Joe Manchin, D-W.Va.

Murkowski, who chairs the Senate energy committee, said lawmakers "will regroup and look for a path forward, but finding one will require members to be more reasonable and accommodating than they have been in the last week.''

Manchin, the energy panel's top Democrat, said it was “a shame” that the energy committee's good work “was impacted by the Environment and Public Works Committee's inability to reach consensus.'' Manchin called the bill "a down payment on emissions-reducing technologies" that will reassert U.S. leadership in global markets.

McConnell, a Kentucky Republican, said he was was disappointed at the impasse, but denied he was to blame.

“Contrary to the Democratic leader’s assertions on the floor, I am certainly not blocking any bipartisan amendments,'' McConnell said Tuesday. "What is really happening is that the Democrat leader is moving the goalposts.''

McConnell was referring to comments by Senate Democratic Leader Chuck Schumer announcing his opposition to the energy bill unless McConnell allows a vote on the HFC provision.

“Phasing out these HFCs is very important, and it will go a long way in fighting climate change and protecting the environment for future generations,'' the New York Democrat said Monday. "Leader McConnell is blocking an important, bipartisan amendment that would help.''

The HFC provision is supported by an unusual coalition that includes major environmental groups and the U.S. Chamber of Commerce, along with the American Chemistry Council and the National Association of Manufacturers.

Kennedy, who has major chemical manufacturers in his state, said GOP leaders were blocking a vote on the amendment "because they're scared it'll pass.''

Even if McConnell and other leaders oppose the amendment, they should allow a vote, Kennedy said in a floor speech. "OK you don't agree with the amendment. That's why God made roll-call votes,'' he said.

Kennedy declared the energy bill “dead as a doornail” after the procedural vote Monday, but Carper said in a statement that, "We’ve come too far to give up now.''

He urged GOP leaders to allow votes on the HFC amendment and a separate measure backed by Sens. Rob Portman, R-Ohio and Jeanne Shaheen, D-N.H., to improve energy efficiency.

“We should not have to choose between energy efficiency and phasing out HFCs,” Carper said. "We should have an up-or-down vote on both of these amendments.

McConnell, in his speech Tuesday, said he was not giving up. He voted no on the procedural measure Monday night so he will be in a position under Senate rules to ask for a new vote if agreement can be reached.

“I hope we can get past this showmanship, finish this bipartisan legislation and send it to the House so we can get it on the president’s desk,'' McConnell said. “Let’s not squander this opportunity (to) help our nation move toward greater energy security, energy efficiency and energy affordability for years to come.''