The bill, which lays out a path towards net zero carbon emissions, is expected to pass. 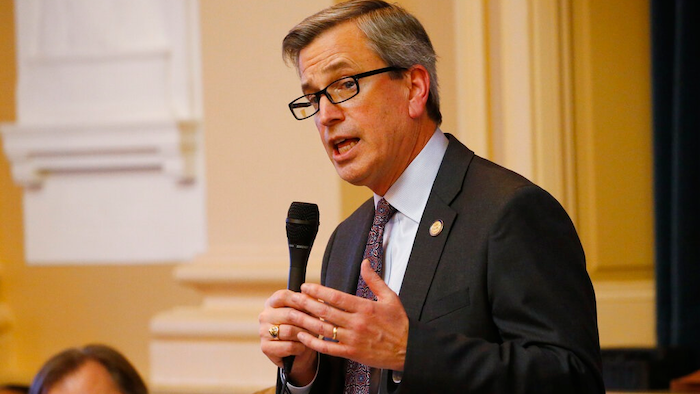 RICHMOND, Va. (AP) — A sweeping energy bill that supporters said would make Virginia a national leader in addressing climate change passed the state House Thursday amid warnings by critics that it will carry a steep price tag.

The legislation, called the Virginia Clean Economy Act, moved to the Senate for its expected final passage.

One of the new Democratic majority's priorities this session, the bill would overhaul how Virginia utilities generate electricity, laying out a path toward zero carbon emissions by 2045. It paves the way for an enormous expansion of offshore wind generation, solar or onshore wind generation, and the use of battery storage technology, which advocates say will create thousands of jobs.

Sponsor Del. Rip Sullivan called the measure “the most important opportunity this body has ever had to take control of our clean energy future."

The House passed the bill 51-45, and the Senate was expected to pass it Friday, sending it to Gov. Ralph Northam, whose administration has been involved in the negotiations.

The bill's sponsors said hundreds of hours of negotiations have gone into the legislation. Participants in those talks also included Dominion Energy, environmental groups and Advanced Energy Economy, a national association of businesses.

Republican lawmakers have opposed the measure, repeatedly raising concerns about costs to ratepayers. A handful of Democrats opposed it, also over ratepayer costs, and some suggested the bill's goals weren't adequate to address the urgency of climate change.

The State Corporation Commission has previously estimated Dominion Energy, whose electric utility is Virginia’s largest and covers about two-thirds of the state, would collect about $50.8 billion from Virginia customers due to the solar, wind and battery storage requirements.

Dominion would earn about $12.5 billion in profit over the life of the facilities after taxes, according to the commission.

The SCC has estimated implementing the bill would result in an annual minimum increase for the typical residential customer's bill of $27.80 for the years 2027-2030, a figure disputed by the legislation's backers.

Angela Navarro, deputy secretary of commerce and trade, said a consultant the administration hired found that in 2030, the average monthly residential customer's bill would be $.71 lower than it is now.

An analysis done for Advanced Energy Economy also found the measure would reduce bills, by about $3.41 per month.

The bill allows utility customers to be charged a fee to fund a program intended to keep the electric bills of low-income individuals down, a provision criticized by Republicans.

The bill's future briefly seemed in doubt Thursday, after the House voted to adopt amendments from Democratic Del. Sam Rasoul, an opponent of the measure, that its sponsors considered unfriendly. That set off frenzied lobbying among Democrats. The amendments were withdrawn, the measure passed, and lobbyists supporting the measure let out an audible sigh of relief, watching just outside the House chamber.

The measure that advanced Thursday was described as a compromise between the different versions that previously cleared each chamber.

The latest edition included a provision stating regulators must consider the social cost of carbon __ a greenhouse gas that contributes to climate change __ when deciding whether to construct a new generating facility.

The new bill also does away with a provision that would likely have forced a southwest Virginia coal plant to close by 2030, a change that sparked an enormous outcry from Republican lawmakers and local officials whose communities benefit from the plant's tax revenue.

Instead, both Dominion Energy and Appalachian Power must close all electric generating units that emit carbon by 2045. The Virginia City Hybrid Energy Center, owned by Dominion and located in Wise County, could still close sooner.

Sullivan said a number of provisions had also been added to strengthen the SCC's oversight of enacting the measure after critics, including the attorney general's office, raised concerns.

The bill doesn't contain an explicit moratorium on new fossil fuel-fired generating facilities, a point some critics said showed it didn't go far enough. Instead, the bill says that if two Virginia cabinet secretaries decide that the bill's emission-reduction targets aren't being met, they will advise legislative leaders about whether a moratorium should be issued by 2030.

Advocates for increased energy competition said the bill would make it much harder for power companies besides the state’s two largest utilities to operate in the state.

Also Thursday, the Senate passed a bill over the objection of Dominion that would restore state regulators' oversight of how electric utilities can write off certain costs. Environmentalist cheered that as a win in the business-friendly upper chamber.