Utility to Plead Guilty to Federal Charges Over Explosions

The company said in an emailed statement that it takes full responsibility for the disaster. 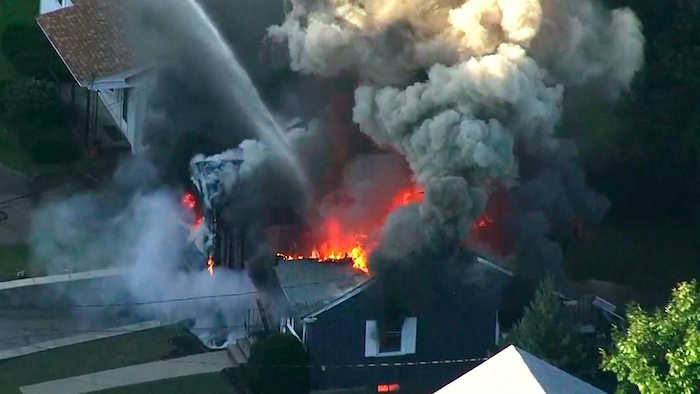 In this Sept. 13, 2018 file image from video provided by WCVB in Boston, flames consume the roof of a home following an explosion in Lawrence, Mass.
WCVB via AP, File

BOSTON (AP) — A utility company blamed for a series of natural gas explosions in Massachusetts that left one person dead and damaged dozens of homes has agreed to plead guilty to breaking pipeline safety laws, federal officials said Wednesday.

Columbia Gas of Massachusetts will plead guilty to violating the Pipeline Safety Act following a federal investigation into the September 2018 explosions, the U.S. Attorney's Office in Boston tweeted.

The company said in an emailed statement that it takes full responsibility for the disaster.

“Today’s resolution with the U.S. Attorney’s Office is an important part of addressing the impact," the company wrote. “Our focus remains on enhancing safety, regaining the trust of our customers and ensuring that quality service is delivered.”

The company is being held criminally and financially accountable, the FBI said. Federal officials are expected to hold a news conference Wednesday morning to announce more details.

The explosions and fires in the Merrimack Valley communities of Lawrence, Andover and North Andover injured about 25 people and damaged or destroyed dozens of buildings. Many people were forced into temporary shelter, and thousands of homes and businesses went without natural gas service for weeks and even months during the winter.

Leonel Rondon, 18, died when a chimney collapsed on his vehicle in the driveway of a friend’s home. He had gotten his driver's license just hours earlier.

Why Did Alarms Fail in Gas Explosion?