While the Keystone project awaits a final decision, scenes are unfolding almost every week in lesser-known developments that have quietly added more than 11,600 miles of pipeline to the nation's domestic oil network. 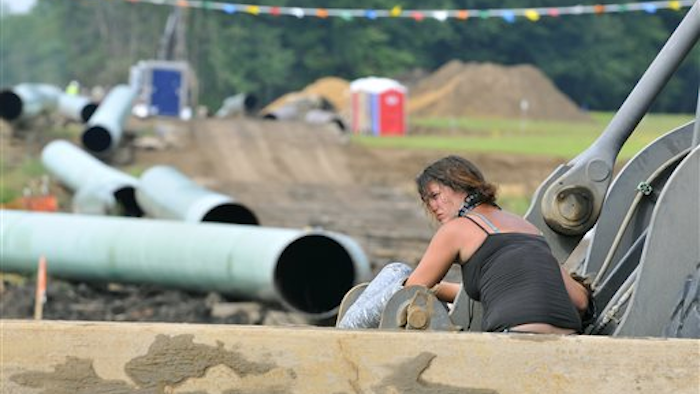 In a far corner of North Dakota, just a few hundred miles from the proposed path of the Keystone XL pipeline, 84,000 barrels of crude oil per day recently began flowing through a new line that connects the state's sprawling oilfields to an oil hub in Wyoming.

In West Texas, engineers activated a new pipeline that cuts diagonally across the state to deliver crude from the oil-rich Permian Basin to refineries near Houston. And in a string of towns in Kansas, Iowa and South Dakota, local government officials are scrutinizing the path of pipeline extensions that would pass nearby.

While the Keystone project awaits a final decision, scenes like these are unfolding almost every week in lesser-known developments that have quietly added more than 11,600 miles of pipeline to the nation's domestic oil network.

Overall, the network has increased by almost a quarter in the last decade. And the work dwarfs Keystone. About 3.3 million barrels per day of capacity have been added since 2012 alone — five times more oil than the Canada-to-Texas Keystone line could carry if it's ever built.

The pipeline build-out provides a little noticed counterpoint to the fierce political battle being waged over the 1,179-mile TransCanada project, which is still in limbo seven years after it was proposed. During the long wait for Keystone, the petroleum industry has pushed relentlessly everywhere else to get oil to market more efficiently, and its adversaries have been unable to stop other major pipelines.

"There's been a lot of growth — we're really positive on it in general," said Rob DeSai, an equity analyst with Edward Jones who focuses on the energy industry. "The oil that's being produced in the U.S., in many cases, it's basically in the middle of nowhere. You need new infrastructure to get that oil to market."

Environmental groups have fought Keystone by citing the risk of leaks and the climate-change consequences of fossil fuels. They hope to make cleaner energy options more appealing. Their success has inspired local protest groups to challenge more projects.

But those efforts, while slowing a few pipelines, have not stopped any because the regulatory path is smoother when a pipeline does not cross an international border, as Keystone would.

In Minnesota, local opponents succeeded last year in getting state regulators to consider rerouting a 616-mile pipeline proposed by Toronto-based Enbridge around pristine lakes and forests, delaying it for at least a year.

More typical, though, was an Enbridge project to double the capacity of a 285-mile stretch of pipeline in Michigan. Groups like the Michigan Coalition Against Tar Sands fought the proposal, citing a spill in 2010 that caused serious environmental damage. But the Michigan Public Service Commission ruled the project acceptable, and the expansion went ahead.

In Texas, Magellan's BridgeTex Pipeline, designed to take up to 300,000 barrels of crude per day from Colorado City to refineries in Houston, was recently completed over landowners' protests about its path. Local officials cleared the way for the company to use the state's eminent-domain law to condemn land for the pipeline. It came online last year.

Some environmentalists acknowledge that changing a pipeline's route often may be the best they can hope for.

In most states, opponents have to prove a project does not serve the public interest or poses a clear environmental threat.

In states that depend on energy jobs, regulators tend to be receptive to the industry. Supporters also argue that transporting oil by pipeline is safer than by train, noting recent accidents and spills.

Since 2012, more than 50 pipeline projects have been approved, completed or are under development, including the just finished 600-mile Enbridge Flanagan South line, which runs through four states.

The recent surge in oil production, from roughly 5 million barrels a day in 2008 to 8.9 million barrels in 2014, has pushed new webs of pipe across regions that until recently had few. Dozens of new lines ranging up to 700 miles connect drill sites in the Upper Midwest to refineries in the region or to hubs in Oklahoma and along the Gulf Coast.

Even TransCanada has been busy. The company unveiled a 200-mile, $600 million proposal late last month that would carry oil from North Dakota's Bakken field north to Canada and connect to other lines that can take it to the East Coast.

"When Keystone was first announced, I think that was something like a third of (TransCanada's) expected budget," said DeSai, the Edward Jones analyst. "TransCanada now has had so many projects that now Keystone's a much smaller percentage."

President Barack Obama has said his decision on Keystone, which would take Canadian tar sands oil to Gulf Coast refineries, would depend in part on its possible contribution to global warming. He is awaiting a State Department report on its environmental impact.

But the State Department does not review pipelines that are entirely inside the United States, which is the vast majority of them.

Pipeline companies also soften resistance by paying landowners for access and by assuming all liability for leaks. But some opponents say they believe that the new resistance inspired by Keystone will eventually raise more public concern about oil shipments.

In Iowa, a former state lawmaker, Ed Fallon, is walking the 400-mile route of a proposed pipeline and blogging about his trip to build support for environmentalists' protests.

"They want people to just roll over and take what's coming," he said of oil companies. "We know that's wrong. We know this pipeline can be stopped" because of the Keystone stalemate.