Hillary Rodham Clinton dodged questions Tuesday about her positions on trade and the Keystone XL pipeline, telling a New Hampshire voter that if the future of the project opposed by environmentalists remains "undecided when I become president, I will answer your question." 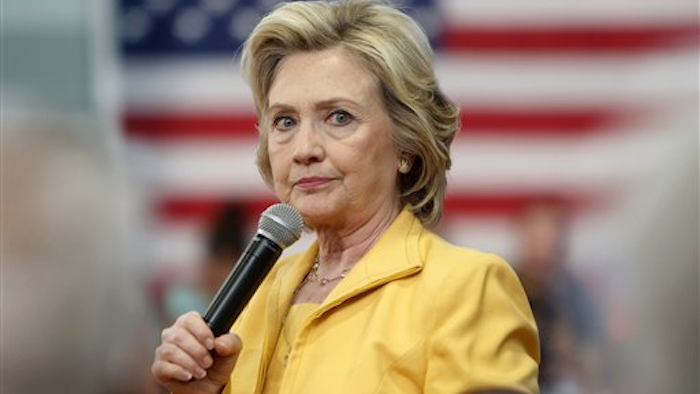 NASHUA, N.H. (AP) — Hillary Rodham Clinton dodged questions Tuesday about her positions on trade and the Keystone XL pipeline, telling a New Hampshire voter that if the future of the project opposed by environmentalists remains "undecided when I become president, I will answer your question."

Sensing an opportunity, Clinton's rivals for the Democratic presidential nomination escalated their critique of the party's front-runner. "It is hard for me to imagine how you can be serious about climate change and not oppose the Keystone pipeline," Vermont Sen. Bernie Sanders told The Associated Press.

A day after laying out a sweeping plan to foster renewable energy and combat climate change, Clinton stuck with her refusal to say where she stands on the $8 billion pipeline. Environmental groups vigorously oppose the project, which would transport oil from Canada's tar sands to refineries on the Gulf of Mexico, arguing it would contribute to global warming.

"My assessment is that it is not appropriate or fair for me to prejudge in a public area what Secretary (of State John) Kerry and President (Barack) Obama eventually have to decide," Clinton said. "I will not do it. I'm sorry if people want me to."

The former secretary of state also declined during a town hall-style meeting in the early voting state to take a firm position on the Trans-Pacific Partnership, noting her early work to lay the groundwork for the trade deal that labor unions and liberals oppose.

Clinton's aides argue her work at the State Department is a major asset for her candidacy, even if it prevents her from taking positions on certain topics — such as Keystone and the Pacific trade deal — that are closely watched by the Democratic base.

"Having the experience of being a former Secretary of State distinguishes her and her candidacy, but it comes with responsibilities that at times can limit her," said Jennifer Palmieri, communications director for the Clinton campaign. "We know that the experience is well worth whatever price she may pay politically."

As Clinton told New Hampshire voters in a steamy elementary school auditorium on Tuesday: "I'm in a very different position than any other candidate. I was there."

But refusal to say definitively where she stands on those two issues has frustrated liberals and fed into Republican attacks on her trustworthiness. The Republican National Committee quickly seized on Clinton's remarks, blasting out a statement saying her refusal to express a clear view are "making it abundantly clear she'll say or do anything to get elected."

Clinton's refusal to take a position has also given rivals such as Sanders and former Maryland Gov. Martin O'Malley an opportunity to sharpen their case against the heavy favorite for the Democratic nomination.

O'Malley, who has struggled to gain traction against Clinton and Sanders, offered perhaps his most stinging criticism of Clinton's economic agenda to date in an interview with New Hampshire television station NH1 that aired late Monday.

The former Maryland governor said Clinton's "closeness to Wall Street is well-known and genuinely held. But it's a difference of opinion that she and I have. I believe our federal government should protect our common good and Main Street from being worked over by recklessness on Wall Street. She does not."

O'Malley has pressed the Democratic field to support reinstating the law that separated the business of commercial and investment banking, which was repealed during President Bill Clinton's administration. Sanders does, but Clinton has yet to take a firm position on doing so and said the issue is more complicated than a single piece of banking legislation.

Asked Tuesday by reporters in Washington how he distinguishes himself from Clinton, Sanders pointed to his voting record in Congress and what he described as a "virtually 100 percent voting record for the AFL-CIO."

"That's not where I come from," Sanders said. "I vote with working people. That's who I am."

Sanders said in an interview with the AP that Clinton's recent climate change proposal didn't go far enough to curb global warming, adding that Keystone amounted to a litmus test for any candidate seeking to champion the environment.

Bruce Blodgett, a software architect from Amherst, New Hampshire, pressed Clinton to give a "yes" or "no" answer on Keystone at her town hall in Nashua. Clinton, who declined to take a position on Keystone after leaving the State Department in 2013, responded that it wouldn't "be right" for her to "second guess" the administration, which is currently weighing whether to approve the project.

"If it's undecided, when I become president I will answer your question," she said, offering a smile.

Her remarks were met with silence by the sweaty crowd.