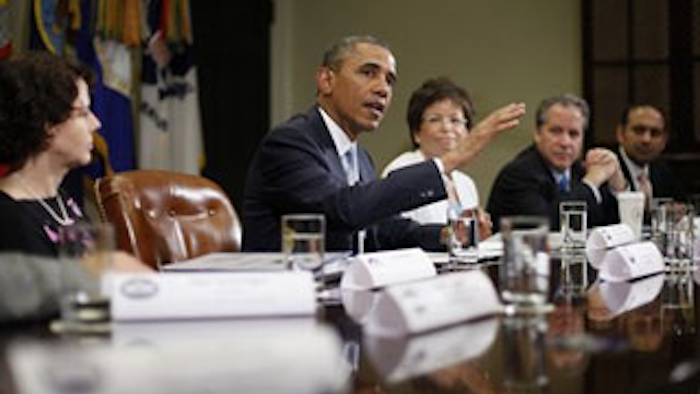 Obama, in a speech Tuesday at Georgetown University, was to announce he's issuing a presidential memorandum to launch the first-ever federal regulations on carbon dioxide emitted by existing power plants, moving to curb the gases blamed for global warming despite adamant opposition from Republicans and some energy producers.

The far-reaching plan marks Obama's most prominent effort yet to deliver on a major priority he laid out in his first presidential campaign and recommitted to at the start of his second term: to fight climate change in the U.S. and abroad and prepare American communities for its effects. Environmental activists have been irked that Obama's high-minded goals never materialized into a comprehensive plan.

By expanding permitting on public lands, Obama hopes to generate enough electricity from renewable energy projects such as wind and solar to power the equivalent of 6 million homes by 2020, effectively doubling the electric capacity federal lands now produce, senior administration officials said. He'll also set a goal to install 100 megawatts of energy-producing capacity at federal housing projects by the end of the decade.

Obama also was to announce $8 billion in federal loan guarantees to spur investment in technologies that can keep carbon dioxide produced by power plants from being released into the atmosphere.

"While no single step can reverse the effects of climate change, we have a moral obligation to act on behalf of future generations," the White House said in a statement, arguing that climate change is no longer a distant threat — the 12 hottest years on record all occurred in the past 15 years.

The linchpin of Obama's plan involves new and existing power plants. Forty percent of U.S. carbon dioxide emissions, and one-third of greenhouse gases overall, come from electric power plants, according to the federal Energy Information Administration. The Obama administration already has proposed controls on new plants, but those controls have been delayed and not yet finalized. Tuesday's announcement would be the first public confirmation that Obama plans to extend carbon controls to existing plants.

"The country is facing a threat; the president is facing facts," said Dan Lashof of the Natural Resources Defense Council, praising Obama for taking aim at power plants. "Reducing that pollution is the most important step we can take as a nation to stand up to climate change."

A spokesman for major power companies said the industry long has understood the importance of addressing climate change and has been working to reduce greenhouse gas emissions for two decades. The industry will consider whether new climate change policies and regulations "mesh" with its ongoing transition to a cleaner generating fleet and an enhanced electric grid, said Tom Kuhn, president of the Edison Electric Institute, a group that represents power companies.

Even before Obama spoke, reaction from Republicans was swift and dismissive, reflecting the opposition to climate legislation on Capitol Hill that prompted a frustrated Obama to sidestep lawmakers and take action himself. Don Stewart, a spokesman for Senate Minority Leader Mitch McConnell, R-Ky., said imposing carbon rules on power plants amounts to a national energy tax.

Senior administration officials, who weren't authorized to comment by name and requested anonymity, said Obama will set a timeline for putting new power plant controls in place. But he won't issue detailed emission targets or specifics. Instead, the president will launch a process in which the Environmental Protection Agency will work with states to develop specific plans to rein in carbon emissions, with flexibility for each state's circumstances.

Obama also will announce more aggressive steps to increase efficiency for appliances such as refrigerators and lamps, the White House said, adding that stricter standards could reduce carbon pollution by more than 3 billion tons between now and 2030 — the equivalent of a half-year's worth of carbon pollution from power plants. Another component of Obama's proposal will involve ramping up hydropower production from existing dams.

Obama raised climate change as a key second-term issue in his inaugural address in January, but has offered few details since. In his February State of the Union, he issued an ultimatum to lawmakers: "If Congress won't act soon to protect future generations, I will."

Framing Obama's efforts as part of a broader, global movement, the White House said the U.S. can play a leading role in persuading other nations to join in efforts to slow the warming of the planet.

Obama is calling for an end to U.S. support for public financing for new coal-fired plants overseas, officials said, but will exempt plants in the poorest nations as long as the cleanest technology available in those countries is being used. He's also pledging to work with major polluting countries like China and India to curb emissions, building on an agreement Obama struck recently with China's leader to phase out hydrofluorocarbons, potent greenhouse gases used in air conditions and refrigerators.

Another of Obama's goals — to prepare communities for the inevitable effects of climate change — appears to be more aspiration than concrete plan. Community leaders and environmental activists say that what cities and states need to prepare for flooding and higher temperatures is money — something Obama is hard-pressed to provide without Congress' go-ahead.

Even with favorable policies, it can take generations to create jobs in individual industries.
Apr 7th, 2021
Follow Us
Most Recent