Michigan's two dominant utilities committed Friday to increase the power they produce from wind and other renewable sources to 25 percent by 2030 under pressure from billionaire environmentalist Tom Steyer, who ended a ballot drive opposed by the electric providers in response. 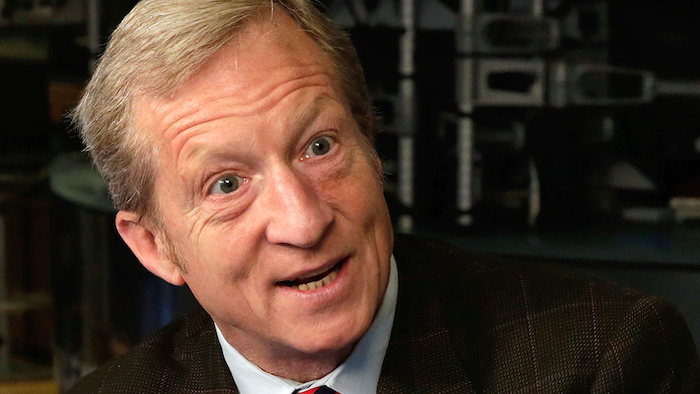 LANSING, Mich. (AP) — Michigan's two dominant utilities committed Friday to increase the power they produce from wind and other renewable sources to 25 percent by 2030 under pressure from billionaire environmentalist Tom Steyer, who ended a ballot drive opposed by the electric providers in response.

Consumers Energy and DTE Energy said they will accelerate plans to generate cleaner power through a combination of boosting the use of renewable power and energy-efficiency programs.

Under current law, electric providers must reach 15 percent renewable energy by the end of 2021. The two major utilities now will target a 25 percent mix by 2030.

DTE Energy Chairman and CEO Gerry Anderson and Consumers Energy CEO Patti Poppe said in a joint statement that they appreciate that Steyer, whose NextGen America provided financial support to collect more than 350,000 voter signatures, and other sponsors "understand our commitment to carbon reduction and how Michigan's energy plan puts the tools in place to achieve this goal in a thoughtful and affordable manner. Our two companies are overwhelmingly in favor of renewable energy and are focused on bringing additional energy efficiency opportunities to our customers."

The ballot drive, which was launched in February , would have required 30 percent renewables by 2030. Backers had been expected to soon submit signatures to the state. If enough petitions had been valid, the initiated bill would have gone to the Republican-led Legislature and then the November ballot if lawmakers did not act.

Steyer called the deal a "win for the people of Michigan," adding that "every American deserves the right to clean air and water." Steyer has been on a mission to impeach President Donald Trump, and his NextGen America group also is backing renewable energy ballot drives in Arizona and Nevada. In 2012, Michigan voters rejected a proposed constitutional amendment that would have required electricity suppliers to generate 25 percent of their power from wind, solar, biomass or hydropower by 2025.

The utilities will detail how they will reach their clean energy goals when they file plans required under 2016 energy laws. Consumers' proposal is due to state regulators by June 15. DTE's is due in March 2019.

Earlier this year, Jackson-based Consumers announced it would phase out electricity production from coal by 2040 to slash emissions of heat-trapping gases that cause global warming. The utility said it would generate 40 percent of its power from renewable sources such as wind and solar energy by then.

Michigan Environmental Council President Chris Kolb, whose group intervenes in regulatory proceedings, called the announcement a "big step forward" and said the organization "will do everything in our power to ensure this commitment is fully implemented and the benefits to our state are fully maximized."