There are 2 million people in the U.S. who live within a mile of 327 Superfund sites in areas prone to flooding or vulnerable to sea-level rise. 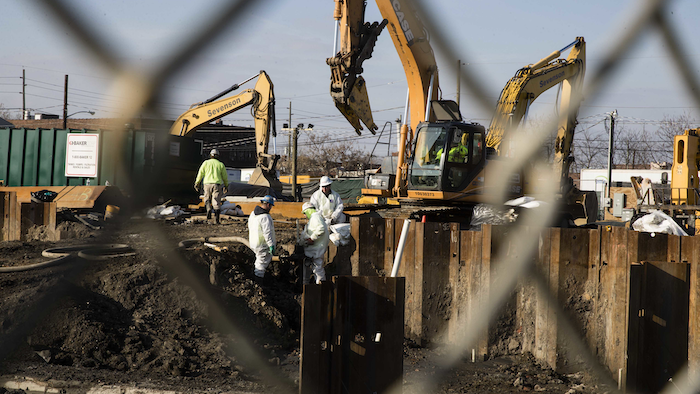 Anthony Stansbury propped his rusty bike against a live oak tree and cast his fishing line into the rushing waters of Florida's Anclote River.

When he bought a house down the street last year, Stansbury says he wasn't told that his slice of paradise had a hidden problem. The neighborhood is adjacent to the Stauffer Chemical Co. Superfund site, a former chemical manufacturing plant that is on the list of the nation's most polluted places. That 130-acre lot on the river's edge is also located in a flood zone.

"Me and my kids fish here a couple times a week. Everyone who lives on this coast right here, they fish on this water daily," said the 39-year-old father of three.

Stansbury is among nearly 2 million people in the U.S. who live within a mile of 327 Superfund sites in areas prone to flooding or vulnerable to sea-level rise caused by climate change, according to an Associated Press analysis of flood zone maps, census data and U.S. Environmental Protection Agency records.

The vulnerable sites highlighted by AP's review are scattered across the nation, but Florida, New Jersey and California have the most, and the most people living near them. They are in largely low-income, heavily minority neighborhoods, the data show.

Many of the 327 sites have had at least some work done to help mitigate the threat to public health, including fencing them off and covering them in plastic sheeting to help keep out rain water.

The Obama administration assessed some of these at-risk places and planned to gird them from harsher weather and rising seas. EPA's 2014 Climate Adaptation Plan said prolonged flooding at low-lying Superfund sites could cause extensive erosion, carrying away contaminants as waters recede.

President Donald Trump, however, has called climate change a hoax, and his administration has worked to remove references from federal reports and websites linking carbon emissions to the warming planet.

"Site managers had started reviewing climate and environmental trends for each Superfund site, including the potential for flooding," said Phyllis Anderson, who worked for 30 years as an EPA attorney and associate director of the division that manages Superfund cleanups until her retirement in 2013. "The current administration appears to be trying to erase these efforts in their climate change denials, which is a shame."

EPA Administrator Scott Pruitt has said he intends to focus on cleaning up Superfund sites, and he appointed a task force that developed a list of sites considered the highest priority. The Stauffer site in Florida is not on it.

Like Trump, Pruitt rejects the consensus of climate scientists that man-made carbon emissions are driving global warming. His task force's 34-page report makes no mention of the flood risk to Superfund sites from stronger storms or rising seas, but eight of the 21 sites on EPA's priority list are in areas of flood risk.

Despite EPA's announced emphasis on expediting cleanups, the Trump administration's proposed spending plan for the current 2018 fiscal year seeks to slash Superfund program funding by nearly one-third. Congress has not yet approved new spending plans for the fiscal year, which began Oct. 1. 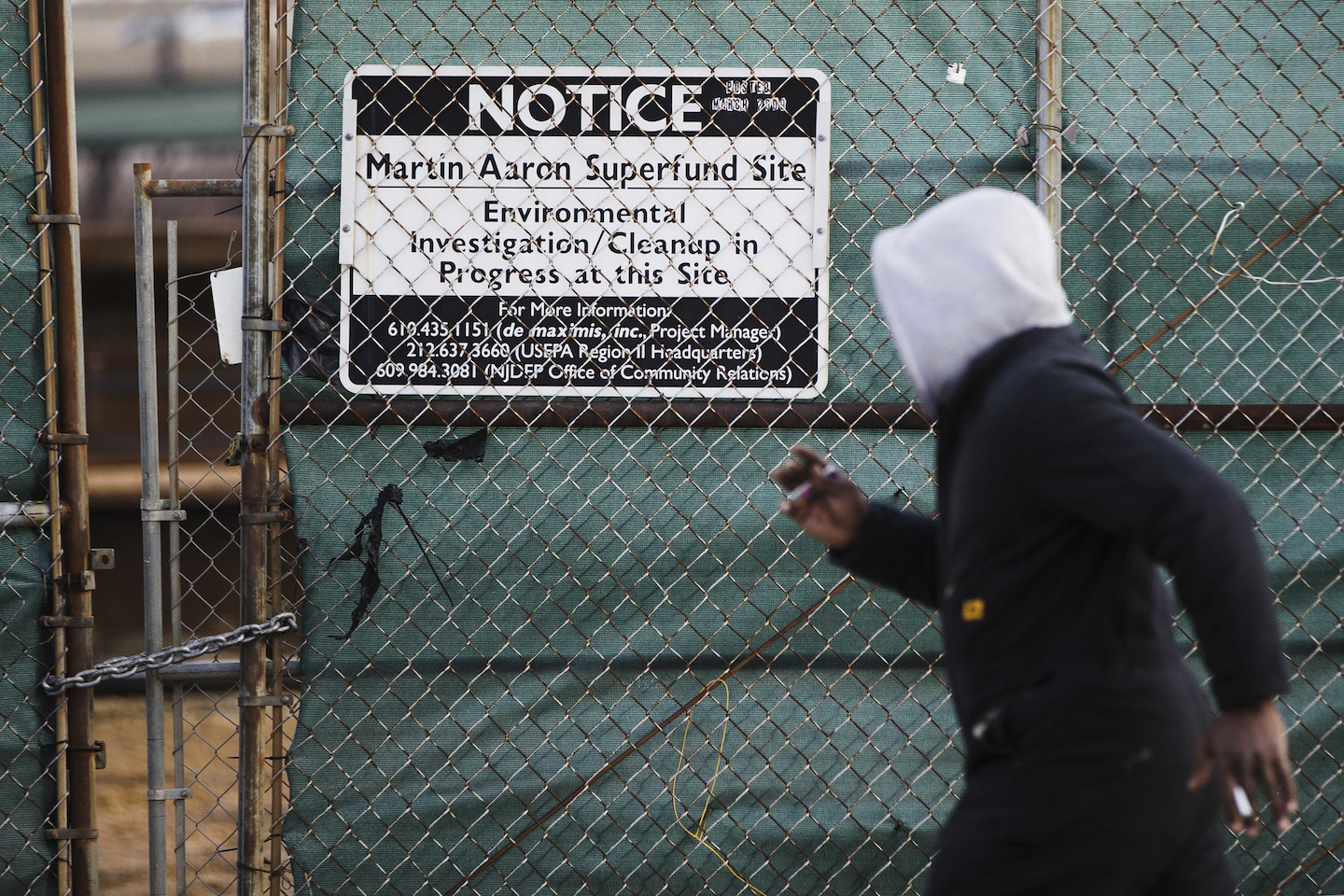 In this Dec. 11, 2017 photo, a man walks past a notice for the Martin Aaron Inc. Superfund site in Camden, N.J. Nearly 2 million people in the U.S. who live within a mile of 327 Superfund sites in areas prone to flooding or vulnerable to rising seas caused by climate change, according to an Associated Press analysis of flood zone maps, census data and U.S. Environmental Protection Agency records. (AP Photo/Matt Rourke)

Pruitt's office declined to comment this week on the key findings of AP's analysis or why the agency appears to no longer recognize an increasing flood risk to toxic sites posed by the changing climate.

However, Jahan Wilcox, an EPA spokesman, said, "Despite fear-mongering from the Associated Press, not a single dollar has actually been eliminated, as Congress still hasn't passed a budget."

Many flood-prone Superfund sites identified through AP's analysis are located in low-lying, densely populated urban areas. In New Jersey, several polluted sites have more than 50,000 people living within one mile.

In Hoboken, across the Hudson River from New York City, the site of a former manufacturing plant for mercury vapor lamps sits within a mile of almost 100,000 residents, including 7,000 children under 5.

The Martin Aaron Inc. Superfund site is in the heart of Camden's Waterfront South, a low-income neighborhood of crumbling row houses and industrial facilities stretching along the Delaware River.

The 2.5-acre lot, which takes up most of a city block, has been home to a succession of factories dating back to 1886 that included a leather tannery. The air around the fenced site hangs heavy with the nose-stinging odor of solvents. Testing found that soil and groundwater under the site contained a witch's brew of highly toxic chemicals, including PCBs and pesticides.

Earlier this month, workers used heavy machinery to remove contaminated soil and to pump polluted water from deep underground. Long range plans approved by EPA call for eventually covering the land and restricting its future use.

Just around the corner, Mark Skinner and his niece Cherise Skinner pushed her 1-year-old son in a stroller in front of their rented row house. Mark Skinner shrugged when asked about the work at the former industrial site.

"It's really contaminated, there's a lot of stuff in the ground, but I don't know what all it is," said Skinner, 53, who works at a nearby scrap metal yard and has lived in Waterfront South since he was a teenager.

Foul-smelling water filled the streets there during Superstorm Sandy in 2012, flooding many basements, long-time residents said. Census data show about 17,250 people live within a mile of the Martin Aaron site — 65 percent are black and 36 percent are Latino.

Across the nation, more than 800,000 homes are located near flood-prone toxic sites. Houses are at risk of contamination if intense flooding brings water into them, and many more people could be affected if the contamination seeps into the ground, finding its way into drinking water.

Mustafa Ali, who resigned in March as EPA's senior adviser and assistant associate administrator for environmental justice, said it's no accident that many of the nation's most polluted sites are also located in some of the poorest neighborhoods.

"We place the things that are most dangerous in sacrifice zones, which in many instances are communities of color where we haven't placed as much value on their lives," said Ali, who worked at EPA for 24 years.

The Stauffer site in Florida is a scrubby green field along the Anclote River, ringed on its other three sides by chain-link fences with "No Trespassing" signs. Testing showed the 130-acre lot's soils were contaminated with radium, the long-banned pesticide DDT, arsenic, lead and other pollutants that over the years have fouled the area's groundwater and the river.

Environmental regulators say the site now poses no threat to people or the environment because the current owner, the pharmaceutical company AstraZeneca, paid to treat contaminated soils, and cover the pollution with a "cap" of clean earth and grass. Still, residential development and use of groundwater on the site are prohibited because of the legacy pollution.

Covering toxic waste is often a cheaper option than completely removing the pollutants, but the installations are not always as long-lasting as the chemicals buried beneath them, said Jeff Cunningham, a civil engineering professor at the University of South Florida.

Damage to a protective cap from storm-fueled flooding has already occurred at least once this year.

In October, the EPA said dioxins from the San Jacinto River Waste Pits Superfund site near Houston were released after the cap was damaged by Harvey-related flooding. Tests afterward measured the toxins at 2,300 times the level that would normally trigger a new cleanup. Pruitt has since ordered an accelerated cleanup of the site.

Seventy-six-year-old Tony Leisner has lived near Florida's Stauffer chemical site all his life. He told the AP he is seeing damage to docks and riverside properties from the ever-rising waters in the neighborhood, and is concerned about what more flooding could mean for the Superfund lot. Although monitoring wells do test local groundwater for contamination from the site, some in Leisner's neighborhood said they're fearful enough to drink only bottled water.

The Anclote River is listed as an "impaired waterway" because it fails to meet state clean water criteria, though how much of that is due to the Stauffer site's legacy is unclear. The state has issued a warning about eating bass out of the river, but there are no signs at the popular fishing spot warning anglers even though tests show heightened levels of mercury in fish.

Leisner said barrels of chemicals at the Stauffer site self-ignited while crews were working. He said he's disappointed neither the company nor EPA removed the pollutants, especially since rising waters are already threatening the neighborhood.

"Burying things rarely helps. And if you've got a chemical that is that toxic ... I think you need to find a way to reuse, recycle and remove (it), to a place where it's not going to contaminate groundwater," he said.