Shell had planned at least one more year of exploration with up to six wells. 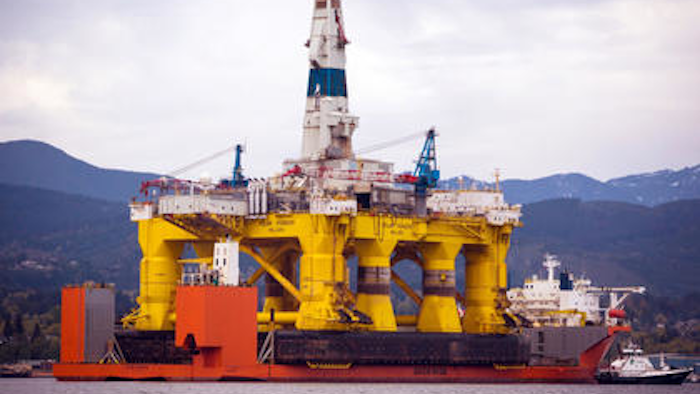 Royal Dutch Shell will stop drilling for oil and gas in Arctic waters off Alaska's coast following disappointing results from an exploratory well backed by billions in investment and years of work.

The announcement represents a big change of heart from Shell, which was counting on offshore drilling in Alaska to help it drive revenue. Environmentalists, however, had tried repeatedly to block the project and cheered the news.

Shell has spent upward of $7 billion on Arctic offshore exploration, including $2.1 billion in 2008 for leases in the Chukchi Sea off Alaska's northwest coast, where an exploratory well about 80 miles off shore drilled to 6,800 feet but yielded disappointing results. Backed by a 28-vessel flotilla, drillers found indications of oil and gas but not in sufficient quantities to warrant more exploration at the site.

"Shell continues to see important exploration potential in the basin, and the area is likely to ultimately be of strategic importance to Alaska and the U.S.," Marvin Odum, president of Shell USA, said in The Hague, Netherlands. "However, this is a clearly disappointing exploration outcome for this part of the basin."

Shell will end exploration off Alaska "for the foreseeable future," the company said, because of the well results and because of the "challenging and unpredictable federal regulatory environment in offshore Alaska."

Oil companies like Shell face a far more challenging environment commercially than they did a year ago as the price of oil has roughly halved to about $45 a barrel currently. Projects no longer look as financially attractive, making investments riskier.

"This Alaskan decision is a reaction to the lower oil price — an example of not going forward with a project because there is just not enough oil and gas to make it economic," said Louise Cooper, an independent analyst at CooperCity. "If the oil price rises again and the well becomes economic, then it can try again."

Shell, whose share price has fallen by around a third over the past year, is also in the middle of an expensive takeover of British-based gas exploration company BG Group. Analysts say that in addition to selling non-core operations, the company should reduce capital spending to help fund its 47 billion-pound ($71 billion) acquisition of BG.

In midday trading in London, Shell's share price was down 1.7 percent at 1,536 pence in a weak overall market.

Monday was Shell's final day to drill this year in petroleum-bearing rock offshore Alaska under its federal permit. Regulators required Shell to stop a month before sea ice is expected to re-form in the lease area.

Shell's announcement was welcomed by environmentalists who have been trying to convince the company to halt its plans to explore in the Arctic. They argued that Shell's operations could increase greenhouse gas emissions and lead to crude oil spills and a disaster for polar bears, walrus and ice seals.

"Big oil has sustained an unmitigated defeat," Greenpeace UK executive director John Sauven said. "The Save the Arctic movement has exacted a huge reputational price from Shell for its Arctic drilling program."

Production rigs extracting oil would be subject to punishing storms, shifting ice and months of operating in the cold and dark. Over the summer, protesters in kayaks unsuccessfully tried to block Arctic-bound Shell vessels in Seattle and Portland, Oregon.

Margaret Williams of the World Wildlife Fund in Anchorage, called the news stunning.

"That's incredible. That's huge," she said. "All along the conservation community has been pointing to the challenging and unpredictable environmental conditions. We always thought the risk was tremendously great."

The U.S. Geological Survey estimates U.S. Arctic waters in the Chukchi and Beaufort seas contain 26 billion barrels or more of recoverable oil in total. Shell officials had called the Chukchi basin "a potential game-changer," a vast untapped reservoir that could add to America's energy supply for 50 years.

Shell had planned at least one more year of exploration with up to six wells drilled.

A transition to production could have taken a decade or longer.

Shell had the strong backing of Alaska officials and business leaders who want a new source of crude oil filling the trans-Alaska pipeline, now running at less than one-quarter capacity.

Charles Ebinger, senior fellow for the Brookings Institution Energy Security and Climate Initiative, said in an interview that a successful well by Shell would have been "a terribly big deal," opening an area that U.S. officials say contains 15 billion barrels of oil.

Though countries are pushing for cleaner energy sources, analysts predict that the world between 2030 and 2040 will need another 10 million barrels a day to meet growing demand, especially in developing countries, Ebinger said.

"Areas like the Arctic are one of the areas that, if we're going to be able to do this, we need to examine," he said.

Shell in 2012 sent drill rigs to the Chukchi and Beaufort seas but was not allowed to drill into oil-bearing rock because the containment dome had been damaged in testing.

The company's vessels suffered serious setbacks getting to and from the Arctic.

One drill vessel broke loose from its towline in the Gulf of Alaska and ran aground near Kodiak Island. Owners of the leased Noble Discoverer, which drilled in the Chukchi and is back this year, pleaded guilty to eight felony maritime safety counts and paid a $12.2 million fine.

That was proof of Shell's Arctic incompetence, critics said.

Odum called drilling off Alaska's coast the most scrutinized and analyzed oil and gas project in the world and said he was confident Shell could drill safely.