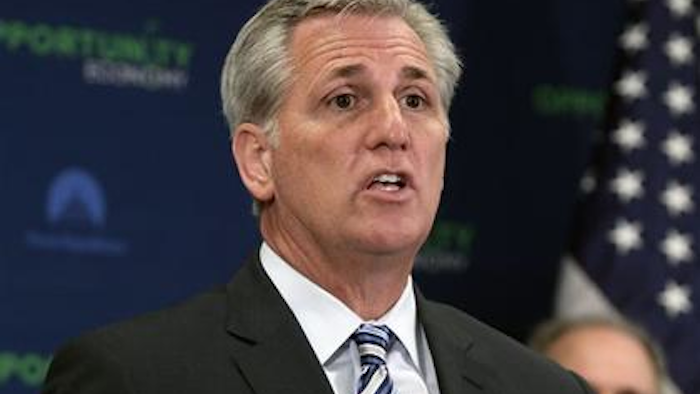 The White House said Tuesday it opposes a House Republican bill to lift the four-decade-old ban on crude oil exports.

A decision on whether to end the ban should be made by the Commerce Department, not Congress, White House press secretary Josh Earnest told reporters.

Earnest also took a shot at House Majority Leader Kevin McCarthy and other Republicans pushing to end theoil export ban, which was imposed in the 1970s as the United States responded to an Arab oil embargo that sparked inflation and prompted long lines at gas stations.

Earnest accused McCarthy and other Republicans of trying to "cozy up to oil interests" by pursuing policies that benefit the oil and gas industry. He urged Republicans to support efforts to eliminate subsidies for oil and gas companies and back investments in wind and solar power and other renewable energy.

Earnest was responding a speech McCarthy, R-Calif., was making in Houston Tuesday to promote the importance of U.S. energy production, including lifting the ban on crude oil exports. The House Energy and Commerce Committee is expected to approve a bill lifting the export ban later this week.

"If there was ever a time to lift the oil export ban, it's now," McCarthy said in a speech to a Houston business group. "Lifting the oil export ban will not only help our economy, it will also bolster our geopolitical standing."

Republicans and some Democrats in the House and Senate have joined the push, saying an ongoing boom inoil and gas drilling has made the 1970s-era restrictions obsolete. House Speaker John Boehner, R-Ohio, said a "scarcity mindset" leftover from that era has been replaced by soaring domestic production of oil and natural gas, even as renewable energy such as wind and solar power also make gains.

A report this month by the U.S. Energy Information Administration — an arm of the Energy Department — said lifting the ban would not hurt consumers at the gasoline pump.

Opponents say lifting the ban would make it harder for U.S. refineries to compete internationally and could lead to job losses.

Sen. Edward Markey, D-Mass., said it makes no sense to export U.S. oil when the nation still imports millions of barrels of oil a day and consumers are saving at the pump because of lower oil prices worldwide.

"Low gas prices are a massive economic stimulus for American consumers and our economy," Markey said. "Oil companies want to lift the export ban in order to tip consumers upside down and shake money out of their pockets."

The U.S should keep its oil home "to benefit our economy, not hand a multi-billion windfall to Big Oil by allowing it to be sent overseas to the highest bidder," Markey said.