The Senate Energy, Environment and Telecommunications Committee met in Spokane, a major railroad hub for the northern United States, to take testimony on a bill that seeks to improve the safety of those oil shipments. 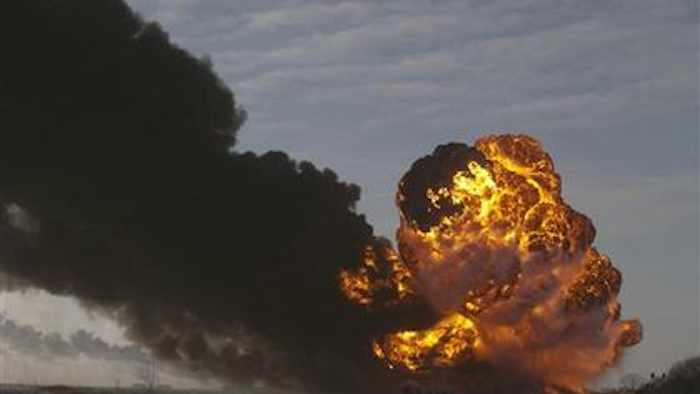 SPOKANE, Wash. (AP) -- Numerous speakers told a Washington state Senate committee Tuesday that they oppose the rapid increase in railcars carrying crude oil from the Bakken fields of North Dakota and Montana through the state.

The Senate Energy, Environment and Telecommunications Committee met in Spokane, a major railroad hub for the northern United States, to take testimony on a bill that seeks to improve the safety of those oil shipments.

But nearly all the members of the public who spoke attacked the measure as too friendly to the oil and railroad industries.

Numerous people referred to last year's explosion of a rail car in Quebec, Canada, that killed 47 people, and worried that could happen in Washington.

"I personally don't believe we should send these 'bomb cars' through our community of almost half a million people," said Mike Petersen of The Lands Council, a Spokane environmental group.

An explosion like the Quebec blast would be catastrophic in downtown Spokane, where elevated railroad tracks run near or adjacent to office towers, hotels and hospitals, speakers said.

But officials of the BNSF Railway noted there hasn't been a rail accident involving hazardous materials in the Spokane region in decades, and said rail traffic is getting safer.

Patrick Brady of BNSF said the railroad has had one flammable release this year in 900,000 shipments of hazardous material.

"It's pretty rare for them to occur," he said.

The oil boom in North Dakota and Montana has created a sharp increase in rail shipments to West Coast refineries and ports. There were no crude oil shipments by rail through the state in 2011, but that increased to 17 million barrels in 2013 and is projected to reach 55 million barrels this year.

That has raised concerns in communities across the state about a derailment and explosion in a populated area.

A bill to regulate crude oil shipments failed in the Legislature last year, but Senate Bill 6582 will be introduced in the next session. The measure calls for the state Department of Ecology to study the safety of the shipments. It also seeks to train emergency responders, and create caches of emergency gear in rail communities. It would be funded by an extension to rail of a 5-cents-per-barrel tax that currently applies only to oil shipments by sea.

"We want to prevent something catastrophic, and to be prepared if something happens," said state Sen. Mike Baumgartner, R-Spokane, a sponsor of the bill.

Baumgartner noted the state's ability to regulate the shipments is limited because interstate commerce is a federal issue.

Critics of the bill included Katie Evans, of the local chapter of the Sierra Club, who said it spends too much money on accident response and not enough on accident prevention.

"We want a moratorium on any increase in crude oil shipments," she said.

Bonnie Mager of Cheney worried that if an oil tanker exploded near her home, "we'd be incinerated."

Other speakers complained that BNSF should be forced to use only the most up-to-date rail cars for the shipments, and should be required to alert local leaders when shipments are coming through their towns.

Kari Cutting of the North Dakota Petroleum Council told lawmakers that rail tankers are safe to contain the Bakken crude, which is not more volatile than other crude oil. But she acknowledged there was no way to ensure that an accident did not punch a hole in a tanker car.

She said about 40 percent of the oil shipped by rail is transported in older cars that are not as safe as newer models.

Johan Hellman of BNSF said about 5 percent of the railroad's cargo was crude oil.