Critics are raging after an energy giant offered pizza coupons to a community near a natural gas well that exploded last month, killing a worker. 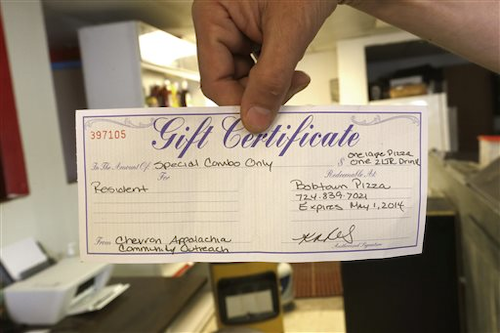 BOBTOWN, Pa. (AP) -- Critics are raging after an energy giant offered pizza coupons to a community near a natural gas well that exploded last month, killing a worker.

News stories, TV shows and blogs — many sarcastic or outright scornful — spread the word far and wide. "Shame on you," one person wrote about the offer by Chevron Corp. "How insulting!" said another. Comedy Central's satirical "The Colbert Report" skewered it.

But the 750 or so residents of the hamlet of Bobtown? Not one has signed an online petition demanding an apology for the pizza offer. In fact, during a recent visit, The Associated Press found the talk of the town is more the furious response by outsiders.

"We feel it was something outside groups generated," said Pete Novak, a co-director of the Polish American Club, a local gathering spot. None of the patrons has voiced outrage, he said, and residents laughed about how people who have never set foot in Bobtown claim to speak for its citizens.

Several people noted that Chevron's pizza offer was made to apologize for traffic after the fire, not to downplay the loss of life.

"I thought it was pretty decent of them," said Ray Elli, 54, who noted that the fire was about a mile outside town, on a ridge, and that people in town didn't feel threatened.

Bill Sowden, co-owner of Bobtown Pizza, the area's only restaurant, says 12 people have redeemed the coupons distributed by Chevron. The whole issue, he said, was blown out of proportion.

The outsized reaction from people not directly affected by the accident illustrates the larger passions surrounding the fracking debate. Many critics seek stricter regulations or bans to protect air and water from pollution, while supporters speak of the economic benefits for an energy-hungry nation. Each side claims the high moral ground.

About 12,000 people have signed an online petition demanding Chevron apologize, according to petition organizer Karen Feridun.

"There are a few from nearby communities, but none right from Bobtown," Feridun wrote in emails this week to the AP. She lives about 250 miles away, at the other end of Pennsylvania. The petition isn't even on public display in Bobtown, about 2 miles from the West Virginia border.

One petition signer from New York City mentioned "Chevron's cavalier arrogance." Other signers came from Alaska, Florida and many other states, as well as Australia, Bulgaria, Costa Rica, Germany and Italy.

Company spokesman Kent Robertson said in an email that Chevron works to be a good partner in communities, that it has been "overwhelmed by the support" from residents and that it appreciates their understanding.

For more than a century, the region around Bobtown has been coal country, and there's still an active mine nearby. But in the past five years, natural gas locked in shale deep underground became newly accessible because of the advent of hydraulic fracturing, or fracking.

On Feb. 11, a Chevron well outside of Bobtown exploded, killing Ian McKee, 27, who lived about a half-hour away in Morgantown, W.Va., and worked for a contractor. The fire burned for a week, and emergency responders, state regulators and crews with special equipment clogged or blocked narrow roads in the area.

State regulators and police and the federal Occupational Safety and Health Administration are investigating the Pennsylvania fire. Chevron could face fines if it broke any rules.

Chevron representatives visited about 100 people five days after the fire, seeking concerns or questions and leaving a gift certificate for a large pizza and 2-liter drink at Bobtown Pizza, which had just opened.

Elli, who was born in Bobtown, said he feels for the worker who died and his family, but that the well fire didn't threaten other residents. And while there are differing opinions about the drilling boom in the community, he doesn't see a problem with it.

"We need gas. Better than getting it from other countries," he said. His current priority is not getting an apology from Chevron, he said, but getting ready for the spring wild turkey season.

He noted that many locals have made money off the drilling boom, both from royalties — which can reach hundreds of thousands or even millions of dollars for landowners — and jobs.

Overall, Pennsylvanians support the drilling boom, said G. Terry Madonna, a professor of public affairs at Franklin & Marshall College in Lancaster. A January poll by the school found that 64 percent of respondents somewhat or strongly favor the gas drilling industry, compared with 27 percent who somewhat or strongly oppose it. In some conservative rural areas with active drilling, the support is even higher.

"I think it's pretty fascinating that folks in the community" aren't openly upset with Chevron, Madonna said, agreeing that such kerfuffles are surrogates in the political fight over American energy production.

Novak had some advice for all the people who think they know how Bobtown residents feel: "Come to this small rural area and see for themselves."