A giant floating natural gas terminal arrived Monday in the Lithuanian port of Klaipeda as the Baltic country tries to further reduce its reliance on energy supplies from Russia. The South Korean-built 300-meter (984-foot) vessel — the size of an aircraft carrier — will be able to provide 4... 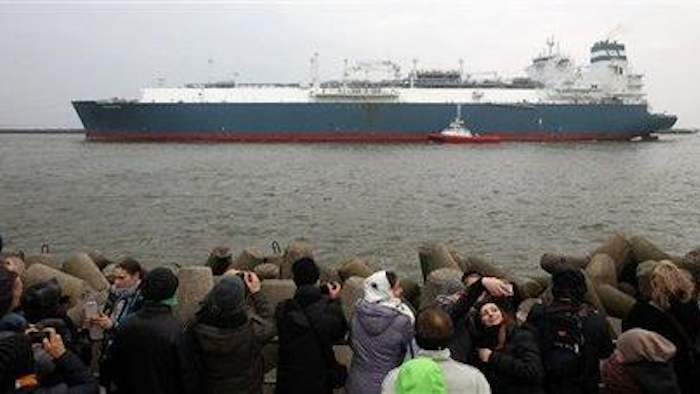 A giant floating natural gas terminal arrived Monday in the Lithuanian port of Klaipeda as the Baltic country tries to further reduce its reliance on energy supplies from Russia.

The South Korean-built 300-meter (984-foot) vessel — the size of an aircraft carrier — will be able to provide 4 billion cubic meters (141 billion cubic feet) of gas a year when it becomes operational, expected in December.

The three Baltic nations of Lithuania, Latvia and Estonia get all their natural gas from Russia and lack connections to the wider European pipeline system that would allow them to import from elsewhere.

Lithuanian President Dalia Grybauskaite said the terminal will be able to cover 90 percent of the gas needs of three countries, importing about 1 billion cubic meters of gas via the terminal in the first year of operation.

"We have become an energy-secure country," she said at a ceremony to welcome the arrival of the ship in Klaipeda, according to the BNS news agency.

Moscow's use of gas supplies as a means of putting pressure on Ukraine — like the Baltics, once part of the Soviet Union — has driven new urgency into projects to diversify sources. The Baltic countries have been among the swiftest in Europe to act to reduce dependence on Russia.

Finland, which also gets all its natural gas from neighboring Russia, and Estonia are planning two new gas terminals at their end of the Baltic, as well as an undersea pipeline to connect the two countries.

The $330 million "Independence" is owned by Norway's Hoegh LNG and leased to Lithuania's SC Klaipedos Nafta terminal operator. It was 50 percent cheaper than a land-based terminal.

On Tuesday another ship was expected in Klaipeda to deliver 50 million cubic meters of gas from Norway's Statoil for testing of the LNG terminal.