European Union leaders agreed early Friday to cut greenhouse gas emissions in the 28-nation bloc to at least 40 percent below 1990 levels by 2030. The deal was aimed at countering climate change and setting an example for the rest of the world ahead of key international climate negotiations... 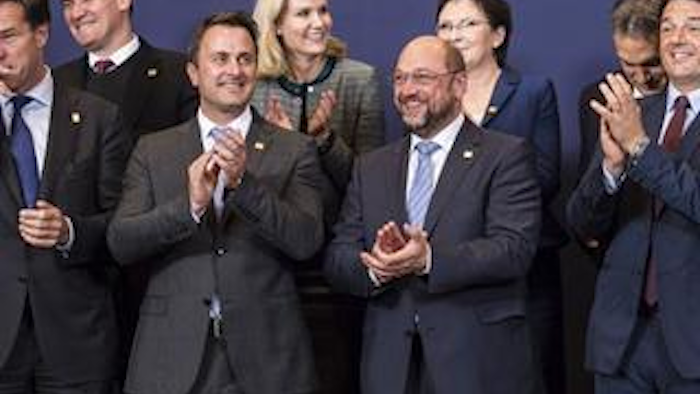 European Union leaders agreed early Friday to cut greenhouse gas emissions in the 28-nation bloc to at least 40 percent below 1990 levels by 2030.

The deal was aimed at countering climate change and setting an example for the rest of the world ahead of key international climate negotiations next year.

A package agreed by leaders at an EU summit in the early hours of Friday after lengthy negotiations also requires climate-friendly, renewable energy to provide at least 27 percent of the bloc's needs and demands that energy efficiency increase by at least 27 percent in the next 16 years.

"It was not easy, not at all, but we managed to reach a fair decision," said European Council President Herman Van Rompuy. "It sets Europe on an ambitious yet cost-effective climate and energy path."

The decision makes the EU the first major economy to set post-2020 emissions targets ahead of a global climate pact that is supposed to be adopted next year in Paris. Other countries including the U.S. and China are bound to be measured against the EU goals as they present their own emissions targets.

The EU pledges will carry weight because they come from an economic powerhouse. The combined Gross Domestic Product of EU member states is larger than that of the United States, which has the greatest GDP of any single nation. The bloc says it is responsible for less than 10 percent of greenhouse gas emissions worldwide.

EU leaders also pledged to increase the amount of energy countries can trade with one another — a move pushed for by Spain and Portugal, which want to be able to sell renewable energy they generate.

Van Rompuy said that countries should be able to import or export 15 percent of their power by 2030, saying the move would help match energy supply and demand across borders.

But environmental activists said it fell short of what the 28-nation bloc should have done.

"The global fight against climate change needs radical shock treatment, but what the EU is offering is at best a whiff of smelling salts," said Greenpeace EU managing director Mahi Sideridou.

Natalia Alonso, Oxfam's Deputy Director of Advocacy and Campaigns, called the targets welcome "but only a first step, which falls far too short of what the EU needs to do to pull its weight in the fight against climate change."

The pact came after strong opposition from Poland and other poorer and developing eastern European nations.

Poland had argued that pace of change was too fast for Eastern European countries that are trying to grow their economies as they restructure old, energy-dependent industries.

Almost 90 percent of Poland's electricity comes from coal. The nation intends to continue that way for decades because mining creates 100,000 direct jobs and many thousands more in related sectors. Warsaw argues that green energy, large wind farms and solar panels still create energy that is too expensive.

He pledged "extra support for lower-income countries, both through adequate targets and through additional funds to help them catch up in their clean-energy transition."

Poland's Prime Minister Ewa Kopacz said the deal would not cost her country.

"I said that we will not return from this summit with new (financial) burdens, and indeed there are no new burdens," Kopacz told Polish reporters.