An explosion at a natural gas storage tank injured four workers on Tuesday in western Wyoming, authorities said. The blast occurred as a maintenance crew was cleaning out the tank in the desert about 30 miles northwest of Green River, Lincoln County Sherrif's Office... 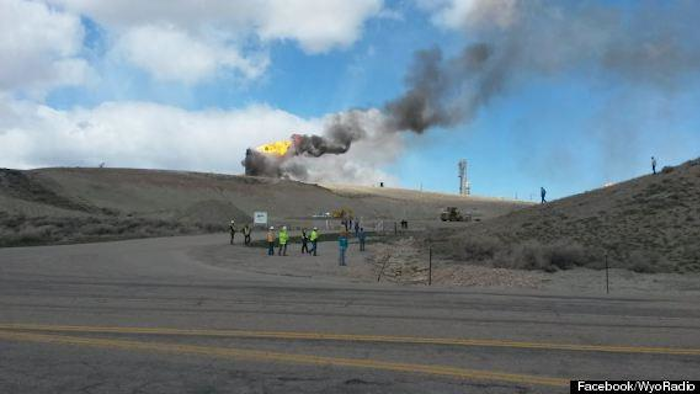 The blast occurred as a maintenance crew was cleaning out the tank in the desert about 30 miles northwest of Green River, Lincoln County Sheriff's Office spokesman Stephen Malik said.

Three of the injured men were taken to a Salt Lake City hospital and the fourth was treated locally and released, said K Leonard, a spokeswoman for Houston-based EOG Resources, which owns the tank. Further details were unavailable.

Two of the injured workers are EOG employees and the others are contract employees, Leonard said.

Malik said firefighters quickly put out the flames. The cause of the blast remained unknown.

In April, an explosion at a gas processing plant in western Wyoming prompted a daylong evacuation of nearby Opal, with a population of 100 people. Nobody was hurt in that blast but a fire burned for five days.

The plant owned by Tulsa, Oklahoma-based Williams is about 15 miles southwest of the tank that exploded Tuesday.

Western Wyoming is home to two of the biggest gas fields in the U.S. — the Pinedale Anticline and Jonah Field about 50 miles northeast of the EOG tank. Many more gas wells are scattered along the eastern slope of the Wyoming Range.

Wyoming has ranked among the states with the worst rates of workplace injuries and deaths in part because of oil and gas industry accidents.