Amazon's Prime Day deals are coming to the aisles of Whole Foods as the online retailer seeks to lure more people to its Prime membership after a recent price hike. 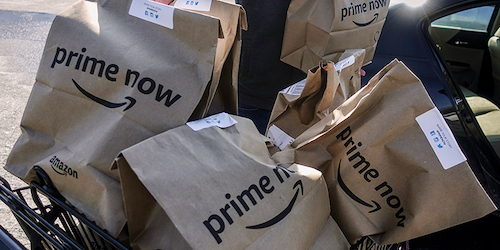 FILE - In this Feb. 8, 2018, file photo, Amazon Prime Now bags full of groceries are loaded for delivery by a part-time worker outside a Whole Foods store in Cincinnati. Amazon’s Prime Day deals are coming to the aisles of Whole Foods, as the online retailer seeks to lure more people to its Prime membership after recently hiking up the price. (AP Photo/John Minchillo, File)

NEW YORK (AP) — Amazon's Prime Day deals are coming to the aisles of Whole Foods as the online retailer seeks to lure more people to its Prime membership after a recent price hike.

This year's sales event, which starts July 16, will be six hours longer than last year's and will launch new products. Amazon hopes to keep Prime attractive for current and would-be subscribers after raising the annual membership fee by 20 percent to $119 and to $12.99 for the month-to-month option. Outside of Prime Day, Amazon has added special discounts for Prime members at its more than 460 Whole Foods U.S. stores and has been adding new TV shows and movies on its video streaming service.

"They want Prime to be a must-have membership," says Suzanne Tager, who heads Bain & Co.'s retail and consumer products practices.

Prime Day, created by Amazon in 2015 to mark its 20th anniversary, has inspired other e-commerce companies to invent their own shopping holidays. Online furniture seller Wayfair introduced Way Day in April, becoming its biggest revenue day ever. While Prime Day brings in more revenue for Amazon, too, it also helps boost its Prime memberships. It had more sign-ups during 2017's event than any other day in the company's history, Amazon said at the time, without providing specific numbers.

Here's a look at what's new for this year's Prime Day:

WHOLE FOODS IN THE MIX: Expect discounts on groceries as well as in-store events, such as cooking demonstrations, says Jamil Ghani, the global vice president of Amazon Prime. And at its more than a dozen Amazon Books stores, discounts will expand beyond devices.

IT'S LONGER: After extending the daylong event to 30 hours in 2017, this year's Prime Day will be 36 hours long, starting the afternoon of July 16 and running through July 17.

NEW PRODUCT LAUNCHES: Several companies have agreed to launch new products on Prime Day, Amazon says. Among them, a Fingerlings unicorn doll whose horn lights up and a Delta kitchen faucet that can be turned on through Amazon's Alexa voice assistant.

PRIVATE LABEL PUSH: Amazon has been increasing its line of store brands, and it'll be offering deals such as 25 percent off its Rivet furniture brand, which didn't exist a year ago. Other deals include 30 percent off its Mama Bear diapers and baby products.

MORE COUNTRIES: Amazon has been expanding its Prime membership around the world, and four new countries will be a part of Prime Day this year: Australia, Luxembourg, the Netherlands and Singapore. Amazon disclosed for the first time this year that it had more than 100 million paid Prime members worldwide.