The Taylors’ defense argued for suspended sentences for the two, who spent 10 months in custody before their extradition. 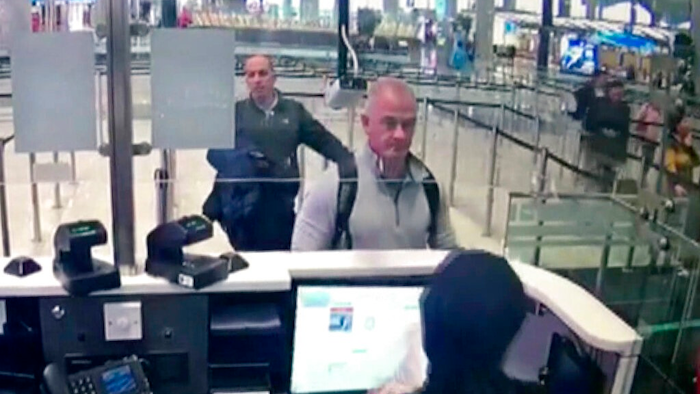 This Dec. 30, 2019 image from security camera video shows Michael L. Taylor, center, and George-Antoine Zayek at passport control at Istanbul Airport in Turkey. The trial in Tokyo of two Americans, Taylor and his son Peter Taylor, charged with helping Nissan’s former chairman, Carlos Ghosn, flee Japan wrapped up Friday, July 2, 2021 with prosecutors seeking prison terms of more than two years for each of them.
DHA via AP, File

TOKYO (AP) — The trial in Tokyo of two Americans charged with helping Nissan’s former chairman, Carlos Ghosn, flee Japan wrapped up Friday with prosecutors seeking prison terms of more than two years for each of them.

The Americans, former Green Beret Michael Taylor and his son Peter Taylor, were arrested in Massachusetts last year and extradited in March. They acknowledged guilt when their trial opened last month and have apologized for their alleged roles in Ghosn’s escape.

Ghosn was arrested in November 2018 and fled in December 2019 to Lebanon while out on bail awaiting trial.

The maximum penalty in Japan for helping a criminal is three years in prison. Prosecutors demanded a sentence of of two years and 10 months for Michael Taylor and two years and six months for his son.

The Taylors’ defense argued for suspended sentences for the two, who spent 10 months in custody before their extradition.

Chief Judge Hideo Nirei said sentencing was set for July 19. The Taylors’ case has sped along compared to most Japanese trials, which tend to drag on for many months, if not years.

“I stand here today a man whose life has been destroyed because of this,” he told the court. “I am a citizen of this earth. No one will stand before you and be more remorseful and sorry than me and my son.”

He denied prosecutors' allegations that he had profited from helping Ghosn to escape. He said he was “so deep in debt because of this.”

“After my experience in the Japanese judicial system, my impression has changed a lot,” he said. “And last but not least, I apologize to the people of Japan, and I deeply regret my action.”

The prosecutors described Ghosn's flight as a “very cunning and brash escape.”

Ghosn is still wanted on charges of falsifying securities statements in under-reporting his compensation, and of breach of trust in using Nissan money for personal gain. He is a citizen of France, Brazil and Lebanon, which does not have an extradition treaty with Japan.

Ghosn, who led Nissan Motor Co. for two decades, has insisted he is innocent, stressing the compensation was never agreed upon or paid, and the expenses were for legitimate business.

In December 2019, Ghosn put on sunglasses and walked from his Tokyo home to Shinagawa station. He rode a bullet train to a hotel in Osaka, where he hid in a big box, supposedly containing audio equipment, that had air holes punched in it so he could breathe, according to prosecutors.

The box was taken to a private jet, skirting luggage inspections, and flown to Turkey. Ghosn then traveled on to Lebanon.

The Taylors’ defense lawyer Keiji Isaji argued that Ghosn was the chief culprit, and his clients were exploited because they didn’t understand Japanese law.

Isaji asked the court to treat Michael Taylor with leniency given his record as a Green Beret and work in FBI anti-terrorism operations and humanitarian charities. He described Peter Taylor as “a young businessman showing promise." He said neither were likely to commit another crime.

“They deeply regret what they did,” Isaji said.