The two men hid Ghosn in a large box, allowing him to flee Japan. 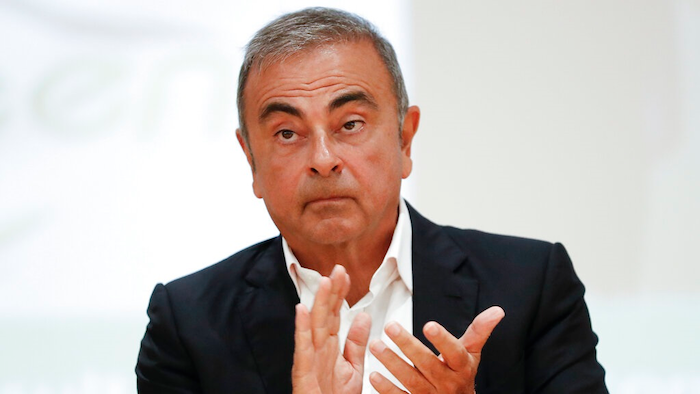 TOKYO (AP) — The trial of two Americans accused of helping former Nissan Chairman Carlos Ghosn escape from Japan while out on bail will open on June 14, the Tokyo District Court said Wednesday.

Michael Taylor and his son Peter are accused of hiding Ghosn in a music box so he could flee to Lebanon in late 2019. The Taylors have been denied bail at the Tokyo Detention Center and not available for comment.

Ghosn, arrested in 2018, was awaiting trial on financial misconduct allegations, including underreporting his compensation and breach of trust in diverting Nissan Motor Co. money for personal gain, when he fled. He says he is innocent.

Japan has no extradition treaty with Lebanon, but has one with the U.S., which extradited the Taylors last month after the U.S. Supreme Court rejected their appeal.

Michael Taylor, with the help of another man, George-Antoine Zayek, hid Ghosn in a large box, which passed through airport security in Osaka, central Japan, and was loaded onto a private jet that flew to Turkey, according to Japanese authorities.

Peter Taylor is accused of meeting with Ghosn and helping carry out the escape. The Taylors were paid at least $1.3 million, authorities say.

The Taylors argued in the U.S. courts they did not commit a crime because jumping bail is technically not a crime in Japan.

Tokyo prosecutors have said they are accused of helping a criminal escape and violating immigration regulations. They face up to three years in prison if convicted.

Although prospects for Ghosn facing trial in Japan are dim, Greg Kelly, a former Nissan executive and an American, is standing trial in Tokyo on charges of underreporting Ghosn’s compensation. He has denied the charges.

Ghosn, credited with successfully leading Nissan for two decades, was worried about a possible public reaction to his income and had taken a big pay cut in 2010, when disclosure of such executive salaries became required in Japan.

The focus of Kelly’s trial is on whether the various ideas on paying Ghosn after retirement should have been included in the annual securities report, as well as how much Kelly knew of the plans. Kelly has said he was only looking into legal ways to pay Ghosn because he believed it was in Nissan’s interests to prevent Ghosn from going to a rival company.

Japanese executives typically don’t get the big paychecks and stock options some of their American counterparts receive.

During Kelly's trial, Nissan officials have said they went to the prosecutors to get Ghosn arrested because they were worried Nissan's French alliance partner Renault would gain more power and effectively swallow up the Japanese automaker. Ghosn was sent in by Renault in 1999 to salvage Nissan from the brink of bankruptcy.