Two Boston men were handed over to Japanese custody on Monday. 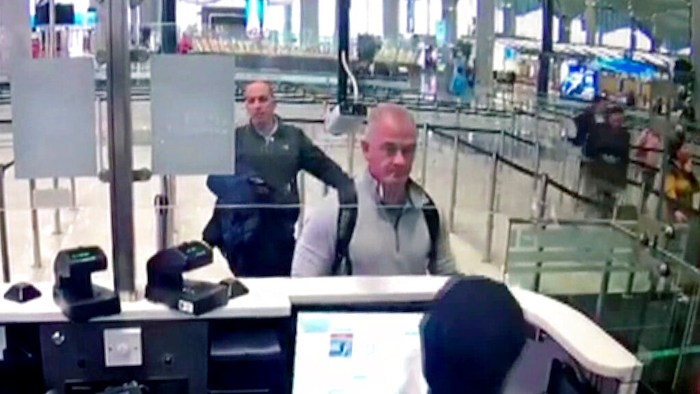 This Dec. 30, 2019, file image from security camera video shows Michael L. Taylor, center, and George-Antoine Zayek at passport control at Istanbul Airport in Turkey. Michael Taylor and his son Peter, suspected of helping former Nissan Chairman Carlos Ghosn skip bail and escape to Lebanon in December 2019 have been extradited to Japan. They were handed over to Japanese custody on Monday, March 1, 2021 and were due to arrive in Tokyo on Tuesday.
DHA via AP, File

Michael Taylor and his son Peter had been held in a suburban Boston jail since May. They were handed over to Japanese custody on Monday and arrived in Tokyo on Tuesday.

Ghosn, who led Nissan Motor Co. for more than two decades, was arrested in 2018, and charged with under-reporting his future compensation and breach of trust in diverting Nissan money for personal gain. He says he is innocent.

WHAT ARE THE FATHER AND SON ACCUSED OF DOING?

Michael Taylor, with the help of another man, George-Antoine Zayek, hid Ghosn in a large black box supposedly containing audio equipment, according to the authorities. The box passed through airport security in Osaka, central Japan, and was loaded onto a private jet that flew Ghosn to Turkey. Peter Taylor is accused of meeting with Ghosn and helping his father carry out the escape. Authorities say the Taylors were paid at least $1.3 million.

WHERE WILL THEY BE TAKEN AND WHAT HAPPENS THERE?

The Taylors, like other suspects, can be held up to 23 days without any formal charges at the Tokyo Detention Center on the outskirts of the capital and questioned for hours almost daily by prosecutors, without a lawyer present. Their lawyer can visit and they can receive snacks and books. The detention can be extended with “rearrests,” if more charges are tagged on. Ghosn spent more than 100 days at the center before gaining his release on bail. The solitary cells are simple, with Japanese-style futon mattresses. The center, which is different from prisons for people who have been convicted, also has an exercise area and clinic.

IS THIS THE ROUTINE TREATMENT OF SUSPECTS IN JAPAN?

The Japanese treatment of suspects has been widely criticized as “hostage justice,” designed to coerce suspects to confess and often resulting in false confessions. The Taylors’ lawyers in the U.S. say they worry they may be treated unfairly in Japan and subjected to “mental and physical torture.” They also argue that jumping bail is not a crime under Japanese law. That is technically accurate, but most people who escape are easily caught in Japan. Japanese prosecutors say they have enough evidence to convict the Taylors.

WHAT CAN BE EXPECTED IF THEY GO ON TRIAL?

Even after formal charges are filed, closed-door pre-trial sessions by the prosecutors and defendants before a judge generally go on for months. The media have no access to such sessions. Jury trials exist in Japan, but only for murders and other heinous crimes. A panel of three judges will hear the Taylors' case in a trial that could last months or even years. English translation will be provided during the trial. Media coverage is allowed, but no filming or recording. If convicted, the Taylors face up to three years in prison and a fine of up to 300,000 yen ($2,900). They could get a suspended sentence and not serve time. In principle, just as in the U.S., people are presumed innocent until proven guilty. But 99% of criminal trials end in convictions.

WHERE IS CARLOS GHOSN AND CAN HE BE TRIED?

Japan has put Ghosn on Interpol's wanted list, but Lebanon has no extradition treaty with Japan. Extradition from the U.S. isn’t common, so the extradition of the Taylors for an alleged nonviolent crime reflects the determination of Japanese prosecutors to pursue the case against Ghosn. Ghosn is almost certain to be extradited if he sets foot in the U.S. Former Nissan senior executive Greg Kelly is on trial in Tokyo on charges he helped under-report Ghosn’s compensation. Kelly, an American, says he is innocent.