Edmunds found that variance can be even greater with an EV. 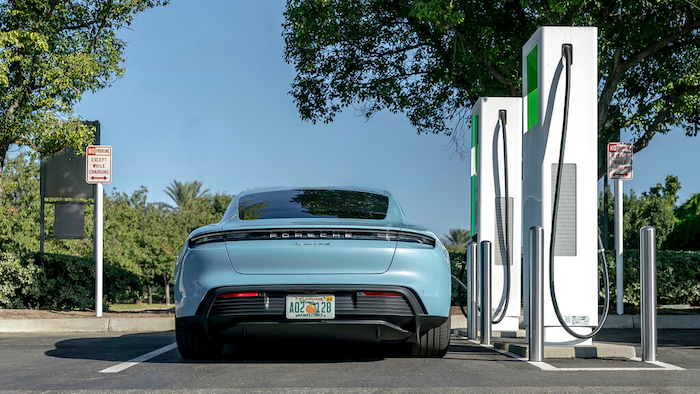 You’ve probably heard the phrase “your mileage may vary” with regard to how your real-world fuel economy compares to the EPA estimate. The adage refers to gasoline-powered vehicles, but the same applies to electric vehicles.

Edmunds has found, however, that the variance can be even greater with an EV, depending on the vehicle.

After owning and testing many of the popular EVs on the roads today, Edmunds created its own standardized real-world test to provide an additional data point for comparison. A closer look at its tests for the Porsche Taycan and the Tesla Model Y Performance turned up some interesting results.

The 2020 Porsche Taycan 4S, an all-new electric luxury sport sedan, was way off from the EPA estimated 203 miles of range in Edmunds’ real-world driving test. Edmunds observed 323 miles and saw a better energy consumption of 32.3 kilowatt-hours of electricity used every 100 miles of driving, versus the EPA’s 49 kWh/100 miles.

In contrast, the 2020 Tesla Model Y Performance with 21-inch wheels — the brand’s newest small SUV — did exceptionally well in the EPA’s test, where it earned an estimated 291 miles and a power consumption rating of 28 kWh/100 miles, using the maximum range mode. While Edmunds saw comparable efficiency in its real-world test, at 28.4 kWh/100 miles, the overall range result of 253 miles was slightly lower than the EPA estimate.

So why the difference?

Many factors come into play. The EPA has five test or drive cycles that simulate road routes and determine how efficiently a car will perform in different scenarios. But the EPA only requires automakers use two. Porsche, like many other manufacturers, opts for the two-cycle test because of the added prep time and costs involved in completing the others. Going this route automatically reduces the Porsche’s potential range by 30%, a larger penalty than if the automaker had chosen the five-cycle test as Tesla did.

ALTERNATE DRIVE MODES ARE NOT TESTED

Another thing working against the Porsche in its EPA test is its default drive mode. If a vehicle has a more efficient operating mode ― but it’s not the default drive mode ― it won’t be employed in the test, which could significantly impact energy use. The Taycan has a Range mode, for example, that makes various adjustments to improve energy consumption without any dramatic loss in daily driving performance.

Edmunds’ experts typically engage these energy-saving drive modes since they are commonly used by EV drivers.

Tesla maximizes regenerative braking in its default drive mode, leaving the lighter coasting setting as an option. This means that when you lift off the accelerator in a Model Y, it immediately begins to slow and recoup that energy. Many seasoned EV drivers prefer this approach since you can often get by without ever touching the brake pedal, which helps maximize the efficiency of each stop.

A key difference between Tesla and other companies is that it makes more of its battery available for use. Electric vehicle batteries that are constantly charged to their maximum capacity tend to degrade quicker over time, so manufacturers including Porsche place stricter limits on charging and use. Tesla leaves it up to the owner’s discretion and simply recommends that the max battery charge only be used for longer trips. Otherwise, it says owners should use a charge of around 90% for daily use.

The 90% charge is what Edmunds followed for its Model Y test as, again, it represents how the majority of Tesla drivers will use their car. Extrapolated out, Edmunds estimates that charging the Y’s battery to its maximum capacity would have added 25 miles to its as-tested range.

EDMUNDS SAYS: Range isn’t everything, but it’s still an important number for many EV owners and those considering an EV. So it’s important to understand how and why some EVs may perform better or worse than their EPA estimates.