It's part of the company's strategy to exit markets that don't produce adequate returns on investments. 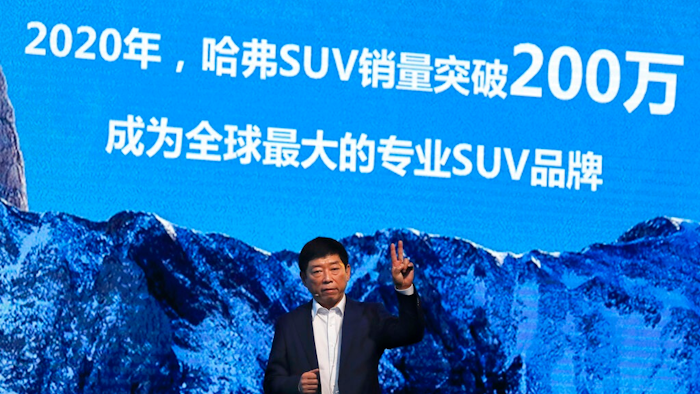 In this Feb. 19, 2017, file photo, Wei Jianjun, chairman of Great Wall Motors Ltd., gestures as he speaks during an event celebrating it sales passing the one million mark, at the Great Wall headquarters in Baoding in north China's Hebei province. General Motors decision to pull out of Australia, New Zealand and Thailand as part of a strategy to exit markets that don't produce adequate returns on investments raised dismay Monday, Feb. 17, 2020 from officials concerned over job losses. The words behind reads "By 2020, Haval SUV sales will pass 2 million, become the world's biggest specialty SUV brand."
AP Photo/Andy Wong

DETROIT (AP) — General Motors decision to pull out of Australia, New Zealand and Thailand as part of a strategy to exit markets that don't produce adequate returns on investments raised dismay Monday from officials concerned over job losses.

The company said in a statement Sunday that it plans to wind down sales, engineering and design operations for its historic Holden brand in Australia and New Zealand in 2021. It also plans to sell its Rayong factory in Thailand to China's Great Wall Motors and withdraw the Chevrolet brand from Thailand by the end of this year.

“This is a very disappointing outcome," said Karen Andrews, Australia's minister for Industry, Science and Technology. She said it was unfortunate both because about 500 workers would loose their jobs, but also because “they only advised the government of this decision just before the announcement.”

Workers at Holden had thought they'd “been through the worst of it, and that's not the case,” Smith said. “For many of them their long-term workers have been very loyal to the company ... they've loved being part of the car industry, and now, it was such an iconic brand coming to an end; it'll mean an end to their jobs."

GM has 828 employees in Australia and New Zealand and another 1,500 in Thailand, the company said.

In Thailand, the decision to sell GM's plant in Rayong, south of Bangkok, may well end up being good news for workers there.

Great Wall Motors, a major maker of sport utility vehicles and pickups, said it intends to expand in Southeast Asia using the plant in Thailand as its base.

“We will also promote the development of the local supply chain, research and development and related industries, plus contribute more to the exchequer of both the local Rayong and Thailand governments," Great Wall's vice president for global strategy, Liu Xiangshang.

Thailand is still determined to be the “Detroit of Asia," Krichanont Iyapunya, a spokesman for the Ministry of Industry said. He said plant closures and openings happen constantly.

“The automobile industry must be adaptive," Krichanont said.

Liu, of Great Wall Motors, said the Thai expansion was part of the company's global push, following the launch of a plant in Tula in Russia in 2019 and plans to acquire GM's Talegaon plant in India.

GM has struggled in Asia in the past year. Its International Operations, which include China, lost $200 million last year, including $100 million in the fourth quarter. It analyzed the business case for future production at the Rayong plant, but low utilization of its capacity and low sales volumes “made continued GM production at the site unsustainable,” the company said.

GM's CEO, Mary Barra, said the company wants to focus on markets where it can drive strong returns, scaling back operations in Australia, New Zealand and Thailand to selling niche specialty vehicles. GM will support its employees and customers in the transition, she said.

GM is making the same moves in Japan, Russia and Europe, where “we don't have significant scale," she said.

GM said it will honor all warranties in the markets, and it will continue to provide service and parts. Local operations also will handle recalls and any safety-related issues, the company said.

The Detroit automaker expects to take $1.1 billion worth of cash and noncash charges this year as it cuts operations in the three countries.

GM has a long history in Australia with the Holden brand, where cars were designed and sold in the U.S. and other markets. The 2008 and 2009 Pontiac G8 muscle car, for instance, was designed as a Holden Commodore and built in Australia. But Holden’s market share, which was nearly 22% in 2002, fell to just over 4% last year.

GM President Mark Reuss, who once ran the Australian operations, said the company explored options to continue Holden, “but none could overcome the challenges of the investments needed for the highly fragmented right-hand-drive market, the economics to support growing the brand, and delivering an appropriate return on investment,” he said in the statement.