It pointed to “sharply lower large volume from large orders.” 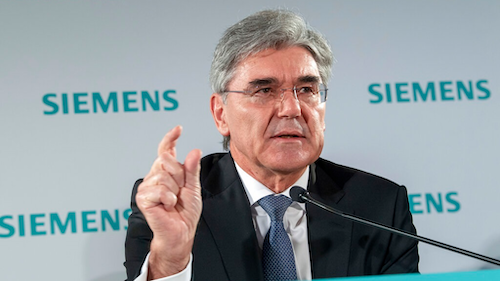 Joe Kaeser, CEO of Siemens, speaks during the Siemens Annual Shareholder's meeting in Munich, Germany, Wednesday, Feb. 5, 2020. Orders and earnings at industrial conglomerate Siemens were lower than a year earlier in the October-December period, the company said Wednesday, weighed down by weaker performances in the auto and energy sectors.
Peter Kneffel/dpa via AP

BERLIN (AP) — Orders and earnings at industrial conglomerate Siemens were lower than a year earlier in the October-December period, the company said Wednesday, weighed down by weaker performances in the auto and energy sectors.

Siemens said orders for the period, its fiscal first quarter, were down 2% at 24.76 billion euros ($27.4 billion). Net profit declined 3% to 1.09 billion euros. It pointed to “sharply lower large volume from large orders” at its mobility business and a similar issue with the gas and power business.

The Munich-based company confirmed its full-year outlook for “moderate growth in comparable revenue, net of currency translation and portfolio effects.”

CEO Joe Kaeser said that “after a powerful finish in fiscal 2019, the first quarter started slowly as expected.”

He said that “the weak performance across our energy businesses reinforces our priorities,” with the company planning to carve out its gas and power division and add its 59% stake in Siemens Gamesa Renewable Energy to create a new entity, Siemens Energy, which will be spun off before the end end of the fiscal year.

As Siemens held its annual shareholder meeting in Munich on Wednesday, protesters outside the venue demonstrated against the company's decision to stand by a contract linked to a coal mine in Australia that climate activists had called for it to drop.

Siemens on Dec. 10 signed the contract to supply signaling systems for a rail link between the Carmichael coal mine and a port. The vast mine is owned by Indian company Adani, and the contract is worth about 18 million euros to Siemens. Kaeser said last month, after promising to review Siemens' participation, that he had concluded the contract had to go ahead.

“You can't win with such issues, because the aspiration many people have ... is legitimate," Kaeser said Wednesday. “But an aspiration alone does not create solutions.”