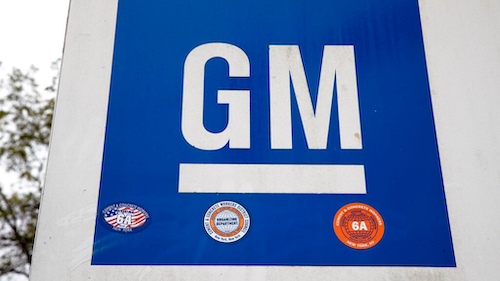 This Oct. 16, 2019, file photo shows a sign at a General Motors facility in Langhorne, Pa. Fiat Chrysler is moving to dismiss a racketeering lawsuit filed by rival General Motors, denying allegations that it bribed union officials to impose higher labor costs on GM. In papers filed Friday, Jan. 24, 2020 with the federal court in Detroit, FCA argued that GM’s lawsuit is not based on facts.
AP Photo/Matt Rourke, File

In papers filed Friday with the federal court in Detroit, FCA argued that GM’s lawsuit is not based on facts.

It also argued that even if the illegal acts GM alleges were true, a four-year statute of limitations on them has expired.

GM alleges in the lawsuit filed last November that Fiat Chrysler bribed officials of the United Auto Workers Union to saddle GM with higher costs in an effort to force GM to merge with the smaller FCA.

GM’s unprecedented lawsuit against a Detroit rival alleges that FCA was involved in racketeering by paying millions in bribes to get concessions and gain advantages in three labor agreements with the union, a charge Fiat Chrysler disputed.

“FCA denies that it either directed or approved any alleged prohibited payments,” the company said in its motion.

GM's alleges that Fiat Chrysler corrupted the bargaining process with the UAW in the 2009, 2011 and 2015 union contracts to gain advantages over General Motors. The allegations stem from a long-running federal probe into Fiat Chrysler bribing UAW officials through a union-company training center that has implicated top union officials.

Ten people with ties to the UAW have been charged in the probe; eight have pleaded guilty, including the widow of a union vice president. Three people who worked at Fiat Chrysler have been convicted.

“FCA was the clear sponsor of pervasive wrongdoing, paying millions of dollars in bribes to obtain concessions” from the union, GM General Counsel Craig Glidden said when the lawsuit was filed.

But Fiat Chrysler said in its motion to dismiss that in order to prove racketeering, GM has to show that FCA somehow took over the union and made it do illegal acts, which it did not do.

Also, Fiat Chrysler contends that GM failed to show that FCA’s activities caused GM to be harmed, a requirement of the racketeering law.

GM’s claim that FCA sought to force a merger by making concessions to the UAW during the 2015 contract talks, then sticking GM with those terms in pattern bargaining, are wrong because the concessions hurt Fiat Chrysler, the motion said. “This theory defies economic logic and concededly did not depend upon the alleged prohibited payments,” the Fiat Chrysler motion said.

GM also accused Fiat Chrysler CEO Sergio Marchionne, who died last year, of authorizing bribes worth more than $1.5 million to union officials in the scheme. The higher labor costs were designed to force GM to merge with FCA, which had rejected Marchionne’s offer to combine the companies, the lawsuit said.

But GM, according to FCA, did not have a theory about why FCA would have had to bribe the union to accept a favorable contract, or why Marchionne would want to stick both companies with higher labor costs “if his ultimate goal was to run the merged company (presumably on a profitable basis),” the motion stated.

In a statement GM called the motion a predictable tactic, and said the company will respond in court. “We are confident in the legal and factual underpinnings of our case,“ the statement said.

Legal motions in the case will continue for several months before a judge rules on the motion to dismiss.