Lebanese prosecutors also asked him to hand over his French passport. 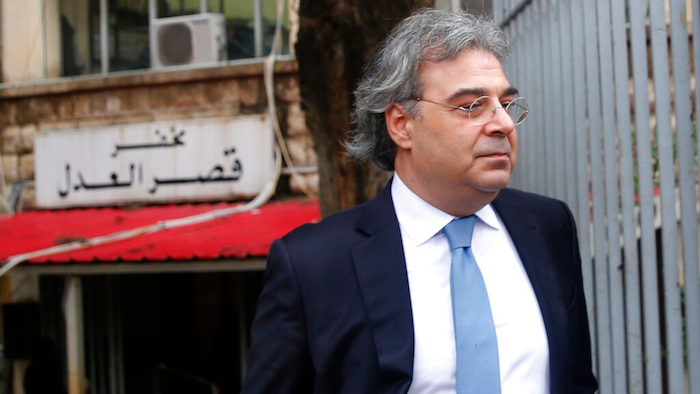 BEIRUT (AP) — Lebanese prosecutors issued a travel ban for fugitive ex-Nissan chief Carlos Ghosn and asked him to hand in his French passport on Thursday, following an Interpol-issued notice against him, a judicial official said.

The travel ban comes after Ghosn was interrogated by prosecutors for nearly two hours over the notice about the charges he faces in Japan over financial misconduct.

The prosecutors also formally asked Japanese authorities for their file on the charges against Ghosn in order to review the case, the official said, speaking on condition of anonymity because he was not authorized to talk to reporters.

Ghosn said he wanted to stay in Lebanon and has no issues to hand in his passport. He was speaking on LBC TV after his questioning by prosecutors.

“I came to Lebanon and I will cooperate with the Lebanese state and judiciary to make sure that everything is done in a way that can't be criticized, not for Lebanon and not for me," he said.

Ghosn then added that he is “a lot more” confident in Lebanon's judicial system than Japan's.

He said Lebanese prosecutors questioned him on all the charges, adding that he was ready to hand in all the documents for his case.

Lebanon last week received the Interpol-issued wanted notice, which is a non-binding request to law enforcement agencies worldwide that they locate and provisionally arrest a fugitive.

At the hearing, Ghosn was asked to provide an address he resides at in Lebanon and was banned from traveling out of the country, the official said. He was also asked to hand in his French passport. It was not immediately clear what legal procedures would follow.

Lebanon and Japan do not have an extradition treaty, and the Interpol notice does not require that Lebanese authorities arrest him. The authorities say Ghosn entered Lebanon on a valid passport, casting doubt on the possibility they would hand him over to Japan.

Interpol cannot compel Lebanon to arrest Ghosn and it will be up to the local law enforcement authorities to decide what to do.

On his first public appearance since he fled Japan, Ghosn on Wednesday railed against the Japanese justice system, accusing it of violating his basic rights and disputing all allegations against him as “untrue and baseless.”

He told a press conference in Beirut that he doesn't trust he would have a fair trial in Japan but said he was ready to face justice anywhere else.

Ghosn, a French, Lebanese and Brazilian national, showed up in Lebanon on Dec. 30, after an audacious and improbable escape from surveillance in Japan. Lebanese officials said he entered legally, with a French passport and a Lebanese identification card.

While a travel ban restricts Ghosn's movement, it also offers him a degree of protection by Lebanese authorities who would presumably ensure he complies with the ban. France also doesn't have an extradition treaty with Japan.

According to the official, Ghosn was also interrogated on a separate report against him over a 2008 visit to Israel. Lebanon and Israel are technically at war. No decision was taken regarding this case, which according to Lebanese law can be punishable between one and 10 years in jail.

Two Lebanese lawyers submitted a report to the Public Prosecutor’s Office saying the trip violated Lebanese law. The violation may not be prosecutable, given that it has happened 12 years earlier. A famous Lebanese director, who also carries a French passport, questioned over the same violation in 2017 was not prosecuted because the visit was three yeas prior.

Ghosn's lawyer, Carlos Abou Jaoude confirmed that his client was questioned in the two separate cases — the Interpol notice and the Israel trip. He told reporters Ghosn was confident in the Lebanese judicial system.

At Wednesday's press conference, Ghosn apologized to the Lebanese, saying he never wished to offend anyone when he traveled to Israel as a French national after Nissan asked him to announce the launch of electric cars there.

Tokyo prosecutors, who arrested him in late 2018, said Ghosn had “only himself to blame” for for four-month-long detention and for the strict bail conditions that followed, such as being banned from seeing his wife.

“Defendant Ghosn was deemed a high-profile risk, which is obvious from the fact that he actually fled,” they said.

Ghosn thanked the Lebanese authorities for their hospitality and defended its judicial system, which has long faced accusations of corruption and favoritism. He said he would be ready to stand trial “anywhere where I think I can have a fair trial.” He declined to say where that might be.

With big gestures and a five-part slide presentation, Ghosn brought his case to the global media in a performance that at times resembled a corporate presentation. Combative, spirited, and at times rambling, he described conditions of detention in Japan that made him feel “dead ... like an animal” in a country where he asserted he had “zero chance” of a fair trial.

He said he was held in solitary confinement for 130 days, was interrogated day and night for hours, appeared in handcuffs and a leash around his waist and was denied rights to see his wife for months.

In his 150-minutes conference Wednesday, Ghosn attacked Japanese prosecutors, saying they were “aided and abated by petty, vindictive and lawless individuals” in the government, Nissan and its law firm. He said it was them, not him, “who are destroying Japan’s reputation on the global stage.”

In Thursday's interview with LBC TV, Ghosn said his case highlighted the thousands of unfair trials in Japan. “It has become now my duty to defend all those people to change this regime that the Japanese are hiding and they claim is a democracy,” he said.

On Tuesday, Tokyo prosecutors obtained an arrest warrant for Ghosn’s Lebanese wife Carole on suspicion of perjury, a charge unrelated to his escape. However, Japanese justice officials acknowledge that it’s unclear whether the Ghosns can be brought back to Japan to face charges.

Nissan has said it was still pursuing legal action against Ghosn despite his escape.