The convergence of cars and computers is blurring the traditional geographical boundaries of both industries. 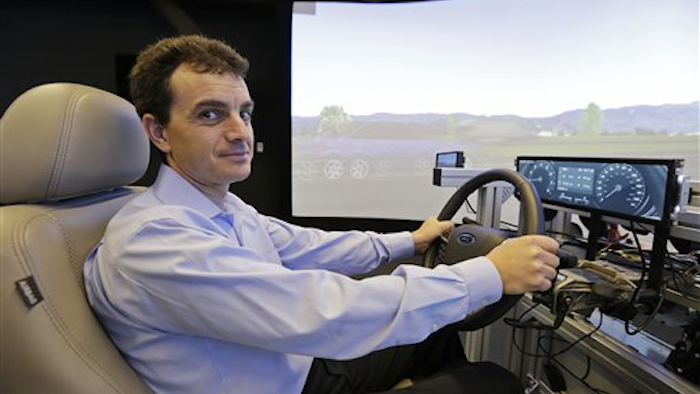 The office has all the trappings of a high-tech startup. There's a giant beanbag in the foyer and erasable, white board walls for brainstorming. Someone's pet dog lounges happily on the sunny balcony.

Welcome to the Palo Alto home of the Ford Motor Co., six miles from the headquarters of Google.

Meanwhile, in a squat, industrial building in suburban Detroit, a short drive from Ford's headquarters, workers are busy building a small fleet of driverless cars.

The company behind them? Google.

The convergence of cars and computers is blurring the traditional geographical boundaries of both industries. Silicon Valley is dotted with research labs opened by automakers and suppliers, who are racing to develop high-tech infotainment systems and autonomous cars. Tech companies — looking to grow and sensing an industry that's ripe for disruption — are heading to Detroit to better understand the auto industry and get their software embedded into cars.

The result is both heated competition and unprecedented cooperation between two industries that rarely spoke to each other five years ago.

"It's a cross-pollination. We're educating both sides," says Niall Berkerey, who runs the Detroit office of Telenav, a Sunnyvale, California-based firm that makes navigation software.

"People think it's shiny Silicon Valley versus grungy Detroit, but that's garbage," says Chris Urmson, who leads Google's self-driving car program. "If you look at the complexity of a vehicle, it's an engineering marvel."

​Dragos Maciuca, a former Apple engineer who's now the technical director of Ford's Palo Alto research lab, says he's seeing a new excitement about the auto industry in Silicon Valley. For one thing, cars provide a palpable sense of accomplishment for software engineers.

"If you work at Google or Yahoo, it's hard to point out, 'Well, I wrote that piece of code.' It's really hard to be excited about it or show your kids," Maciuca he says. "In the auto industry, you can go, 'See that button? The stuff that's behind it, I worked on that.'"

But cocky tech companies have had to adapt to the tough standards of the auto industry, which requires technology to work perfectly, for years, in all kinds of conditions. Maciuca spends much of his time educating software and app developers about the industry's needs.

"Silicon Valley goes toward this model of a minimum viable product. It's easy to throw things out there and try them and see if they work," Maciuca says. "We can't do that."

Santa Clara, California-based Nvidia was best known for making chips for computer games before it got into the car business. Now, it makes the computer processors that power Tesla's 17-inch touchscreen dashboard and Audi's experimental self-driving cars, among other products. It had to develop new manufacturing techniques and higher levels of certification for the auto business, such as tests to make sure its computer chips would still work in subzero temperatures, says Danny Shapiro, Nvidia's senior director of automotive.

For their part, the automakers are learning that rolling out cars that remain static for years until the next model comes out is no longer practical. At the insistence of tech companies such as Telenav and Nvidia, they're learning to make cars with navigation, infotainment and other features that can be constantly updated. Mercedes-Benz, Tesla, Toyota, BMW, and others can now update vehicle software wirelessly to fix problems or add more capability

Shapiro says the cost-conscious auto industry has had to learn to spend a little more — maybe $10 to $20 per car — on computer hardware. Automakers would often go with the cheapest option but then spend even more fixing bugs, or be forced to replace processors that didn't have enough power to add updates.

"We've helped them adopt more of a computer industry mindset, which is not to reinvent what they're doing every five to seven years," Shapiro says.

Even with that new spirit of collaboration, automakers and tech companies also use their local labs to do a little spying.

Frankie James, a former NASA researcher who now runs General Motors' Palo Alto office, says spotting trends and potential threats is one of the most important parts of her job. Her team alerted GM to the car-sharing trend, for example, and the automaker invested $3 million in Relay Rides in 2011.

Now, she's watching companies that could potentially disrupt the auto business, such as Google and Apple. Google has promised a self-driving car within five years, and Apple has hired people from Tesla, Ford and other car companies for its own top-secret project.

The tech industry is also watching its back. Telenav is making a new navigation system for the 2016 Tacoma pickup and other Toyota vehicles, but Apple and Google are also vying for the car's dashboard with their CarPlay and Android Auto systems, which give drivers access to certain smartphone apps.

Telenav's Berkery says automotive accounts for 70 percent of its business, up from just 10 percent when its 10-person Detroit office opened four years ago. Its success in Detroit led to new offices in Berlin, Shanghai and Tokyo.

"A huge amount of disruption is going to take place in this landscape, and new players will come in," Berkery says. "There's no reason why traditional players will succeed."