GM recalled 2.6 million small cars worldwide earlier this year to fix faulty ignition switches that are now blamed for at least 23 deaths nationwide. Barra said suppliers have made enough parts to fix all of the switches, but only 1.1 million small cars have had the repairs so far.

Milford, Michigan — General Motors CEO Mary Barra told investors Wednesday that GM will rely on new models and a big push to sell more cars in China to boost profits in coming years, as the company tries to shift the spotlight from a mishandled recall of older small cars.

Barra needed to reassure investors that GM has a strong plan going forward. The stock has dropped about 18 percent this year. It rose 2.6 percent in afternoon trading.

GM recalled 2.6 million small cars worldwide earlier this year to fix faulty ignition switches that are now blamed for at least 23 deaths nationwide. Barra said suppliers have made enough parts to fix all of the switches, but only 1.1 million small cars have had the repairs so far.

GM has admitted knowing about the problem for a decade, yet it didn't recall the cars until this February. The switches can cause the engine to stall, deactivating the cars' air bags.

Barra said GM is staying with an estimate of $400 million to $600 million to compensate ignition switch crash victims. The company has hired compensation expert Kenneth Feinberg to pay victims. He made his first payments last week.

New models are the linchpin of GM's strategy to grow profit margins. The company said it expects 27 percent of its global sales to come from new or freshened models next year. That figure will rise to 47 percent by 2019 as it accelerates new model rollouts. Barra wouldn't say how many new models would be introduced each year.

But the new vehicles, coupled with cost savings and other measures, should get GM to a 10 percent pretax profit margin in North America by 2016 and 10 percent for the whole company by early next decade. Profit margin is the percentage of each dollar in revenue a company actually keeps.

GM's "absolute onslaught" of new vehicles starts with midsize pickup trucks that are now arriving in GM dealerships and will be followed by the Chevrolet Trax subcompact SUV early next year, President Dan Ammann said. Those two vehicles should boost annual sales by about 200,000 vehicles, and are critical to GM's plans to expand profit margins, Ammann said.

A new Opel Corsa small car is being shown at the Paris Motor Show this week for sale by year end, and GM plans a new Opel Astra compact next year. Then, in 2015 and 2016, GM will freshen the Chevy Malibu midsize car and Cruze compact, followed by the Chevrolet Equinox small crossover SUV.

In China, GM is pinning high hopes on the Cadillac luxury brand, which has struggled in the U.S. despite earning numerous awards. GM expects to introduce nine new Cadillac models in China over the next five years. China, the company predicted, will become the world's largest luxury car market later this decade.

GM also expects Europe to return to profitability in 2016, and says it continues to address challenges in international operations outside of China.

Barra said if the company performs according to plan, dividends will rise. "When we do that our shareholders will receive the return on investment that they deserve," she said, without giving specifics.

GM expects "significant" losses in international operations outside China this year as it pulls the Chevrolet brand out of Europe and launches new products in the Middle East. "Marginal" losses are expected in South America on economic weakness in Brazil and Argentina.

"For me personally, I'm a little more impatient, and I think that's a good thing," she told reporters at the company's proving ground in Milford, Michigan, north of Detroit.

Investors viewed GM's news more favorably than Monday's outlook from rival Ford Motor Co., which said it expects pretax profits for the year to come in below previous predictions. Ford shares have fallen more than 10 percent since its presentation to investors and were down 1.2 percent to $14.61 in afternoon trading Wednesday. 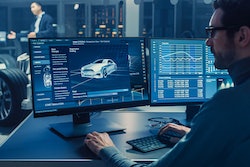