The 2014 Chevrolet Impala was the only non-luxury car to earn the highest safety rating in new tests of high-tech crash prevention systems. 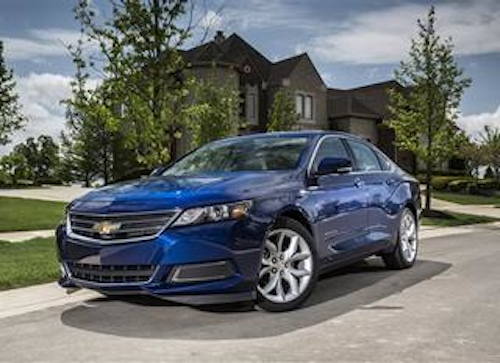 DETROIT (AP) -- The 2014 Chevrolet Impala was the only non-luxury car to earn the highest safety rating in new tests of high-tech crash prevention systems.

The Insurance Institute for Highway Safety tested cars equipped with collision warning and automatic braking systems. It gave a "superior" rating to cars that both warned the driver of a potential collision and applied the automatic brakes to significantly slow the cars.

Collision warning and automatic braking systems use radars, cameras and lasers to determine if a vehicle is getting too close to the car in front of it. Most of the systems warn the driver — audibly, with vibrations in the seat, or both — and prepare the brakes to maximize their effect when the driver presses them.

In some cases, the vehicles brake themselves. That action may not prevent a crash, the institute said, but reducing the speed before the car hits something can help make crashes — and injuries — less severe.

The Impala's rating wasn't affected by a government investigation of one driver's report that the automatic braking system went off several times without warning, eventually causing an accident. Insurance Institute spokesman Russ Rader said the group is aware of the investigation but had no issues with the Impala in testing.

The Arlington, Virginia-based institute, which is funded by insurers, began testing and rating the systems last fall in hopes of pressuring automakers to adopt them as standard equipment. The institute said 40 percent of 2014 models now offer forward collision warning as an option, while 20 percent offer automatic braking. Acura, Mercedes-Benz and Volvo offer the systems as standard equipment on some cars.

Tests are conducted at 12 miles per hour and 25 miles per hour. In the highest-rated cars, the brakes slowed the cars to 2 or 3 mph or less.

Thirteen 2014 models earned "advanced" ratings, meaning they warned drivers but their brakes reduced the speed only moderately. Those vehicles were: the BMW 3 Series, Buick LaCrosse, Lexus IS, Audi A3, Audi A6, BMW 3 Series, Dodge Durango, Lexus GS, Mercedes-Benz CLA, Infiniti QX50 and Infiniti QX70. The BMW 5 Series and BMW X5, which won superior ratings when equipped with a radar and camera, earned "advanced" ratings when equipped with City Brake, a camera-only system.

Three models earned "basic" ratings, meaning they warned drivers of a potential collision but reduced the car's speed by less than 5 mph. They were: the BMW 3 Series (without City Brake), the Infiniti Q70 and the Toyota Avalon.