Automaker Daimler's recall and software fixes for 774,000 Mercedes-Benz cars and vans in Europe will likely cost close to or more than 100 million euros ($118 million.) 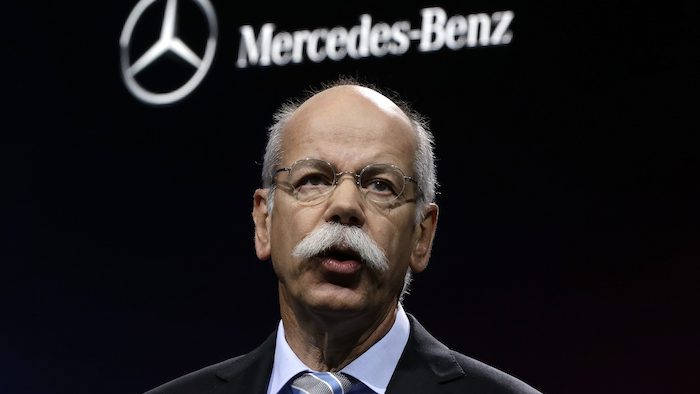 In this Jan. 14, 2013 file photo Dieter Zetsche, Chairman of the Board of Management of Daimler AG, Head of Mercedes-Benz Cars speaks at media previews for the North American International Auto Show in Detroit. Image credit: AP Photo/Paul Sancya, file

Automaker Daimler's recall and software fixes for 774,000 Mercedes-Benz cars and vans in Europe will likely cost close to or more than 100 million euros ($118 million.)

Analyst Marc-Rene Tonn at Warburg Research provided the estimate on Tuesday. Tonn says the direct financial impact will be "limited" because cooperation with authorities should allow Daimler to avoid penalties of up to 5,000 euros per vehicle.

Daimler confirmed Tuesday that the order will lead to the recall of all affected vehicles in Europe. The engines at issue were not offered in the United States. The company says it may appeal legal aspects of the decision.