So far, 23.4 million Takata air bag inflators have been recalled on 19.2 million vehicles. 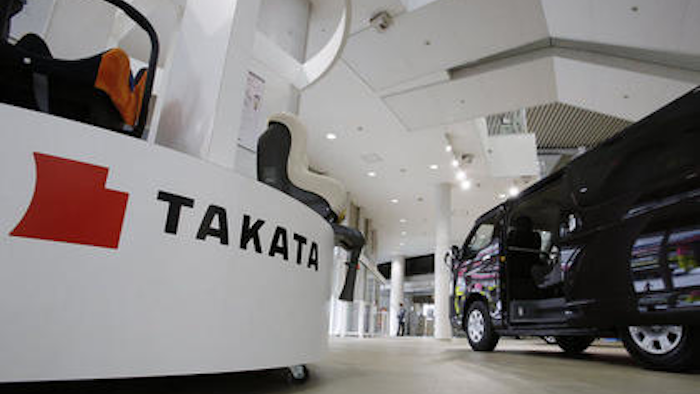 Seven more companies including electric car maker Tesla Motors could be facing recalls because they use air bag inflators made by Takata Corp., according to letters they received last week from U.S. safety regulators.

So far about 23.4 million Takata driver and passenger air bag inflators have been recalled on 19.2 million U.S. vehicles sold by 11 different companies, including Honda and Fiat Chrysler. The inflators can explode with too much force, spewing metal shrapnel. At least eight people have died worldwide and hundreds have been injured because of the problem.

NHTSA said one purpose of the letters is to figure out how many additional vehicles might have to be recalled. The agency is preparing for an Oct. 22 public meeting in Washington to discuss an ongoing investigation into Takata and whether the agency will take over management of all the recalls to speed up repairs. As of Sept. 1, only 4.4 million had been replaced. Automakers have had to scramble to get parts.

NHTSA is asking each of the seven additional companies to identify every model that uses a Takata air bag inflator with ammonium nitrate as the propellant. The letters say Takata's theory on the cause of the problem is that the chemical degrades over time. This "could potentially lead to overaggressive combustion or potentially cause the inflator to rupture." Time, temperature and airborne moisture also play roles in the problem, the letters say.

The agency already was investigating Volkswagen because of a June crash involving an SUV near St. Louis in which the left side air bag inflated with too much force and blew apart the inflator canister. The crash between a deer and a 2015 VW Tiguan was the first reported in a Volkswagen and the first in a side air bag. Previously Takata had said the problem was limited to older designs in front and passenger air bags.

VW said at the time that it was working with NHTSA and Takata to better understand the problem. The Tiguan driver did not seek medical attention.

A Mercedes spokeswoman confirmed that the company used Takata air bags but not those involved in the recalls. Engineers are gathering model information to answer NHTSA's letter, she said.