5 Things To Know About Electric Motorcycles

The new electric motorcycle unveiled this week by Harley-Davidson is a sleek, futuristic bike with powerful acceleration and the hum of a jet airplane taking off. Here are five things to know about electric motorcycles before you take a test ride. 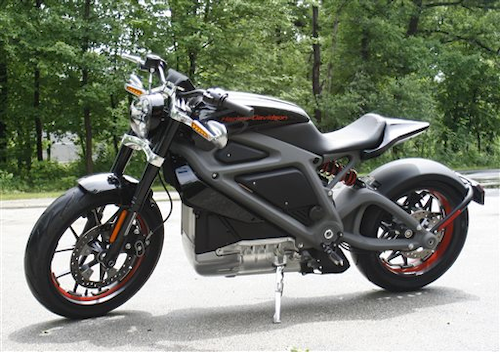 MILWAUKEE (AP) -- The new electric motorcycle unveiled this week by Harley-Davidson is a sleek, futuristic bike with powerful acceleration and the hum of a jet airplane taking off. The public will get its first look at handmade demonstration models of the new LiveWire at an invitation-only event Monday in New York. Harley will then take the bikes on tour for riders to try out and review. Here are five things to know about electric motorcycles before you take a test ride:

YOU CAN ALREADY BUY ONE, JUST NOT FROM HARLEY

Smaller makers already have electric motorcycles for sale. The top-seller is California-based Zero Motorcycles, which has about 4,000 bikes on the road and expects to sell an additional 2,400 this year. Yamaha also has produced an electric demonstration bike, with no word on when it might be released to the public. Harley said it will likely be several years before its LiveWire goes on sale.

One reason big manufacturers might not be rushing to release electric motorcycles is that few people have been buying existing models. Only about 4,500 high-powered motorcycles are expected to be sold worldwide this year, said John Gartner, of the consulting firm Navigant Research. The bigger market right now is in electric scooters and low-powered bikes, with consumers expected to buy roughly 5.2 million this year. Most of those sales will be overseas.

A HOG IS NEVER QUIET

Unlike internal combustion engines, electric motors are silent. Zero Motorcycles has found a niche with police who like the stealthy bikes that don't announce officers' arrival. But sound is a key component of Harley's marketing, so its engineers developed a new one for LiveWire that comes from the meshing of its gears.

THERE'S NOTHING SHIFTY ABOUT ELECTRICITY

Electric motorcycles don't require riders to shift gears, so people used to driving automatic cars might find them more appealing. But anyone who wants to ride on the road will still need to learn to use a clutch; motorcycle license tests are likely to be administered on traditional bikes for the foreseeable future.

ALL THAT INNOVATION COMES AT A COST

Electric motorcycles typically cost about 50 percent more, largely due to the price of batteries. That means a Harley could easily run $15,000 or more. Zero's top-of-the-line SR starts at nearly $17,000.