Museum officials say it's shaping up as the biggest prolonged surge in the attraction's nearly 20-year history, much of it because of the giant hole and damaged cars exhumed from the abyss. 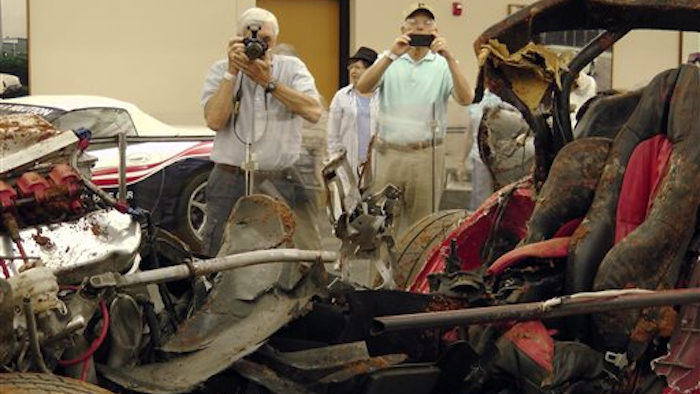 And visitors are as eager to peer into the chasm as they are to see the 'Vettes, if not more so.

"The response to this has been bigger than anyone could have ever imagined," said Katie Frassinelli, a spokeswoman for the museum that sits just off Interstate 65 in Bowling Green. "On the one hand, we don't want to be known as the sinkhole museum. But on the other hand, it's bringing a lot of people that may not have otherwise come."

When the earth opened up in February, stunned museum officials first saw it as a devastating setback as they assessed the wreckage to the cars and building. The eight damaged cars — carrying a total value believed to exceed $1 million — toppled like toys amid rocks, concrete and dirt.

But in the months since, business has shifted into over-drive, a welcome development for an attraction that struggled years ago to stay afloat. Since reopening after a one-day closure, attendance is up nearly 50 percent from the same period a year ago; previously, the museum averaged about 150,000 visitors a year. Sign-ups for museum memberships also are rising fast. The merchandising has started, with sinkhole-related shirts, post cards and prints sold at the gift shop.

Museum officials say it's shaping up as the biggest prolonged surge in the attraction's nearly 20-year history, much of it because of the giant hole and damaged cars exhumed from the abyss.

"We would not have even stopped had it not been for the hole," said Luke Smith of Lima, Ohio, who visited with his family after touring nearby Mammoth Cave National Park.

The museum is situated an hour north of Nashville, Tennessee, and less than two hours south of Louisville, Kentucky. Admission is $10 for adults, $5 for children ages 6 to 16, with free entry for youngsters 5 and under.

"There is a natural tendency to want to see the aftereffects of a natural occurrence," he said.

At the Corvette museum, officials first set up a webcam that allowed thousands of people to follow the painstaking work to retrieve the fallen cars and reinforce the area around the sinkhole. Museum visitors got a glimpse from a distance, behind plexiglass.

But seeing the bonanza, the museum now gives tourists a much closer look at the 40-foot-wide, 60-foot-deep hole.

Visitors stare in awe a few feet away, with a temporary fence separating them from the edge. The damaged cars are displayed in a nearby room, where the mangled remains of some cars draw gasps amid quiet reverence.

Stephen Robb of Waterloo, Ontario, said he and his motorcycle buddies were drawn to the museum by the spectacle of the sinkhole on their way to Nashville for their yearly trip to the U.S.

"It just shows you the power of nature," he said. "I can't believe the devastation to the cars. I don't see car accidents this bad."

Corvette owner Ron Fleenor of Rogersville, Tennessee, gazed sadly at the crumpled, dirt-caked remains of the worst-damaged cars. He spoke about the bond between Corvette owners and the iconic sports car.

"They give you a special feeling," he said. "All of it — the handling, the power and the looks from other people."

Chevrolet stepped forward to oversee restoration efforts. No decision has been made yet on how many cars will be repaired, and the extent of damage varies widely. A 2009 ZR1 Blue Devil suffered minor damage, while a 2001 Mallett Hammer Z06 Corvette was described as a piece of tin foil by the man who donated the car to the museum.

Six of the damaged cars are owned by the nonprofit museum and two were on loan from General Motors. The automaker's Corvette assembly plant in Bowling Green is a short distance from the museum. The cars deemed beyond repair will remain on display.

What becomes of the giant hole that's become a popular draw is still undecided.

Options for the sinkhole include keeping it and adding a walking bridge over it with stairs leading to the bottom; filling it in completely; or leaving a small portion as a reminder. Regardless, the sinkhole will remain open at least through summer, including the museum's 20th anniversary celebration in late August, officials said.

Some die-hard Corvette enthusiasts have been less than thrilled that the sinkhole and damaged cars remain on display. But, Frassinelli said, "It is a part of our history."