A bid by Texas to lure a Tesla battery factory brought that state's salesman-in-chief to the doorstep of California's state Capitol — and to underscore the point, he arrived in one of the automaker's sleek, all-electric vehicles. 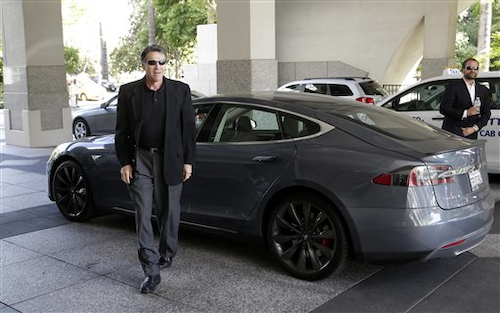 Perry, a former and potential future GOP presidential candidate, said competition between states is a good thing and would help California's economic turnaround.

"There's a real cause and effect here: over-taxation, overregulation, over-litigation, the deterioration of the public schools to a degree they are not developing the workforce you are going to need," Perry told reporters. "Those things are relatively quickly turned around, but it's going to take competition. It's going to take pressure from other states."

Perry has made other visits to California to woo employers and starred in ads last year blasting the state's business climate. Gov. Jerry Brown, a Democrat, dismissed them as "barely a fart," a statement his spokesman, Evan Westrup, reiterated Tuesday in response to Perry's visit.

Brown touts the state's position as a leader in venture capital and direct investment. The state has added 1.3 million jobs since officials say the national recession ended in Feb 2010.

Perry scored a victory in April when Toyota announced it would relocate its U.S. headquarters from the Los Angeles suburb of Torrance to a Dallas suburb with $40 million in incentives. Brown contends there was little California could have done to prevent the move, which the company said had more to do with its own consolidation plans than with taxes and regulation.

But California's business climate is cited as a concern for the Tesla Motors expansion, which would create up to 6,500 jobs.

Tesla CEO Elon Musk said last month that California was back in the running for the massive battery plant, but he also cautioned that it was an "improbable-but-not-impossible" choice because of a lengthy approval process that includes environmental reviews.

Senate leader Darrell Steinberg, D-Sacramento, and Sen. Ted Gaines, R-Roseville, have introduced a bill to expedite construction of the Tesla plant if the company chooses to expand in its home state. The details, such as removing regulatory hurdles or providing tax credits, are still being hashed out among legislators and the governor's administration.

"While they stage a partisan political pageant, we're cutting red tape for urban development, offering tax breaks for new manufacturing, and building our workforce and economy to meet future demands," Steinberg said in a statement responding to Perry's visit.

His spokesman, Mark Hedlund, noted that Texas regulations prohibit Tesla from directly selling its vehicles in that state. He also said Texas leads the nation in residents with minimum wage jobs and without health insurance.

Tesla plans to break ground this summer on the battery factory and start production by 2017 to meet demands for a new line of lower-cost electrical vehicles. Arizona, New Mexico and Nevada also are under consideration.