California Back In The Running For Tesla Plant

California is back in the running for a massive battery plant that the electric car maker plans to start building this year, but CEO Elon Musk said the state remains in the "improbable" category because of the time it will take to win regulatory approval. 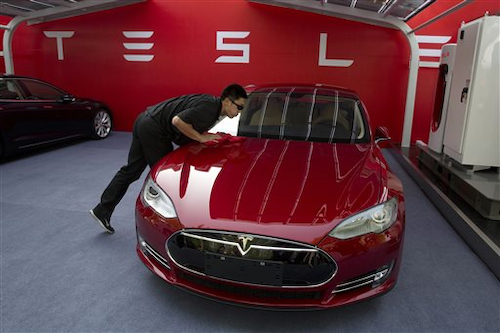 PALO ALTO, Calif. (AP) -- California is back in the running for a massive battery plant that electric car maker Tesla Motors plans to start building this year, but CEO Elon Musk said the state remains in the "improbable" category for winning the plant because of the time it will take to win regulatory approval.

Musk said Wednesday that the company plans to break ground on one of two locations as early as next month for the plant that has been the subject of furious competition from four other Southwestern states. A second site will follow a month or two later.

Palo Alto-based Tesla has previously said just four states were in the running for the plant: Arizona, New Mexico, Nevada and Texas.

But Musk said on a call to discuss Tesla's quarterly earnings report Wednesday that Gov. Jerry Brown and his staff are working hard to woo the company. The problem, Musk said, is the estimated yearlong time frame for winning approval for a plant site.

"The governor and the Legislature are going to try to do something about that but it's a question of timing," Musk said. "California is still in the improbable-but-not-impossible category at this point."

Brook Taylor, a spokesman for Go-Biz, the agency Brown established to streamline business regulations, said in an email that the administration is working hard to bring companies to California, including Tesla. But he declined to say what steps the state is taking to recruit Tesla or to respond to Musk's claim that the approval process is lengthy.

The $5 billion lithium-ion battery factory will provide enough batteries to supply 500,000 vehicles by 2020. Initial production is set to start in 2017.

The company is breaking ground on two plants at once even though it only plans to complete one to reduce risk. The plant must be up and running in 2017 to produce batteries for the company's planned lower-cost vehicle. The costs of delaying vehicle production are much higher than the cost of breaking ground on two battery plants.