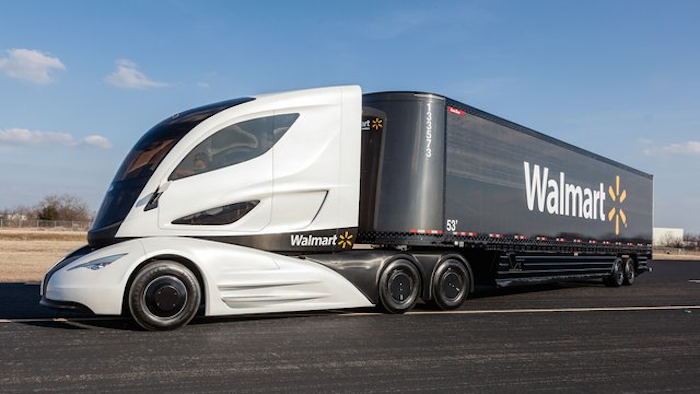 The vehicle may be a reality — it’s a concept, after all — but Doug McMillon, who is the president and CEO of Walmart, did say the platform allows the company to test out new technologies and approaches to saving gas and reducing emissions for its massive fleet. He added: “By seeing through the lens of sustainability, we are accelerating the pace of innovation across our business.”

WAVE features a “micro-turbine hybrid powertrain that can run on diesel, natural gas, biodiesel and probably other fuels still to be developed,” according to McMillon. There is also a battery storage system and an electric motor. The aerodynamic properties center around a rather novel feature: the driver sits in the center of the vehicle, and not on the left, which means the body can be thinner and tapering, rather than the traditional flat surfaces. The nose is convex, which helps flow air better and gives more cargo space.

The trailer itself is made of carbon fiber — two 53-foot sections of it, at that. It’s the first time carbon fiber has been manufactured to such an immense size. The end result is that the trailer weighs about two tons less than traditional models.

Back up in the dash, gone are the traditional mechanical dashes in favor of digital ones that can be customized according to a driver’s wants or needs. These can offer all the standard information, like speed and navigation, while also giving insight into the current performance, and, presumably, the use of the micro-turbine as opposed to the electric motor, as seen in many hybrids today.

While the WAVE wouldn’t help the company in its recent efforts to be supplied by 100 percent renewable energy, it would increase the strength of its messaging efforts.

If WAVE eventually makes its way to the roads, it would be one of the bigger changes — at least visibly — to the semi-trailer trucking industry that we’ve seen in a long time. The weight reduction in the trailer alone could dramatically improve efficiency and decrease the amount of gas used during hauls.

McMillon said, “It’s an exciting time to be at Walmart. We certainly don’t have all the answers, but we’re working hard every day to get better.”