The head of electric car maker Tesla Motors says the company should turn a profit in five years after it brings a lower-cost car to market. CEO Elon Musk, speaking Tuesday at an automotive conference, said Tesla needs to show a profit, and will when it's selling 500,000 cars per year. He... 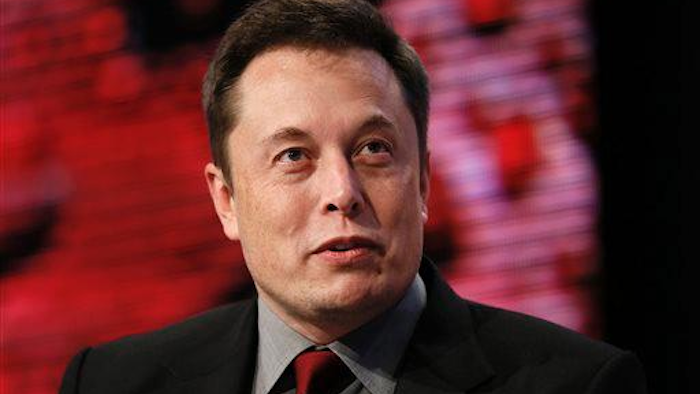 The head of electric car maker Tesla Motors says the company should turn a profit in five years after it brings a lower-cost car to market.

CEO Elon Musk, speaking Tuesday at an automotive conference, said Tesla needs to show a profit, and will when it's selling 500,000 cars per year. He predicted that sales milestone will be reached in 2020, when its lower-cost car — the Model 3 — is in full production.

Tesla, which was founded in 2003, has never made a full-year profit. The company based in Palo Alto, California, expects to sell around 33,000 Model S sedans this year.

In addition to developing the Model 3 and a crossover, Tesla recently reengineered its Model S sedan to offer all-wheel drive. It's also building a $5 billion battery factory in Nevada that is set to begin production in 2017.

Musk wouldn't say how many Model S sedans Tesla sold last year, citing its upcoming earnings report. He did say fourth-quarter sales fell in China because of customers' concerns about plugging in their vehicles if they live in apartment buildings. Musk said that issue is being resolved as Tesla expands its network of supercharging stations in China. He added that North America and Europe saw a "significant increase" in sales.

Tesla shares fell 6 percent to $182 in after-hours trading. That's down 35 percent from their all-time high of $291.42 set in early September.

In addition to the Model 3 — which, at $35,000, would cost half the price of a Model S — Tesla is developing the Model X SUV, which is set to go on sale this summer after several delays. Musk said technical difficulties with the crossover's unique rear doors, which open up instead of out, were the reason.

"I do have an issue with punctuality," Musk joked. "This car is really good. And I do not say these things lightly."

He said he wasn't concerned about competitors, including the Chevrolet Bolt, a $37,500 electric car with a 200-mile range that was introduced this week at the Detroit auto show. General Motors says the Bolt could be on sale by 2017.

"I don't see it as a competitive threat because I think all cars will go electric," he said. "It's not going to affect us, really."

Musk said he wishes more automakers would take a risk on electric cars. Low gas prices, he said, shouldn't hinder their adoption because electric cars are cheaper to run than gas-powered cars even if oil is $40 to $50 per barrel.

"I think there's going to be huge societal pressure towards electric cars," he said. "They're just fundamentally better."

Musk said he plans to lead Tesla at least through high-volume production of the Model 3. He may not always be CEO, he said, but he will play a role in the company "as long as I'm alive."