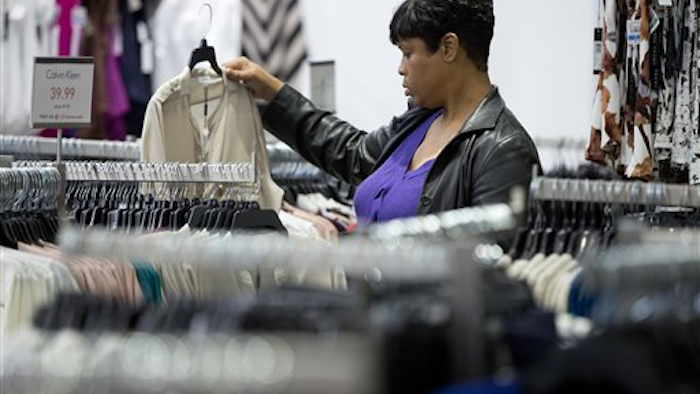 U.S. retail sales perked up in November, as cheaper gas and an improving job market fueled a promising start to the holiday shopping season.

Retail sales rose a seasonally-adjusted 0.7 percent, the most in eight months, the Commerce Department said Thursday. Falling gasoline prices dented gas stations receipts by 0.8 percent, but that appears to have freed up money that consumers took elsewhere.

The figures indicate that consumers have pumped up their holiday shopping, despite initial signs within the retail industry that Black Friday was weak this year. To extract more dollars, stores are plying shoppers with big discounts and other enticements — a trend that will likely continue into the season's finale.

Over the past 12 months, retail sales are up 5.1 percent.

"In the months ahead, we expect consumers keep spending the extra income gained from the strong job market and the collapse in energy prices," said Laura Rosner, an analyst at the bank BNP Paribas.

Average national gas prices have slid to $2.64 a gallon, down nearly 30 cent, or 9.8 percent, over the past month, according to the AAA's Daily Fuel Gauge.

Many analysts believe that holiday spending could rise by at least 4 percent this year because of recent job growth as well. A hiring spree since February has bolstered the number of people with steady paychecks by nearly 2.65 million, and consumer confidence has also brightened.

Still, some preliminary indicators suggested that the Thanksgiving and Black Friday weekend was disappointing for retailers.

An estimated 133.7 million people shopped in stores and online, down 5.2 percent from a year ago, according to a survey of 4,631 people conducted by Prosper Insights & Analytics for the National Retail Federation. Total spending for the weekend was projected to fall 11 percent to $50.9 billion from a year ago.

That hints at the absence of meaningful wage gains for many workers, despite recent job growth. Average hourly wages have risen just 2.1 percent over the past 12 months, slightly ahead of inflation.

But consumer behavior is also shifting. Stores pushed Black Friday deals days or weeks earlier than Thanksgiving weekend. That has created fatigue over the Thanksgiving weekend sales bonanza. The NRF has said that its survey offers a snapshot in time and is not tied to its economic forecast. Rather, it shows how shoppers remain cautious and will look for discounts and deals.

Also, there are signs of people forgoing smaller expenditures to replace bigger ticket items such as automobiles.

Motor vehicles sold in November at an annualized clip of 17.2 million, a 4.6 percent increase from the prior year, according to Autodata Corp.

Subaru and Chrysler led the major automakers with sales increases around 20 percent on strong demand for their small SUVs.

Retailers still need to lure the procrastinators who haven't yet completed their holiday buying. Wal-Mart Stores Inc., the world's largest retailer, launched one-day free shipping that will last until Friday. And it announced hundreds of new savings that will last through the holiday season. It also pledged that holiday gifts ordered by Dec. 19 sent by standard delivery will arrive by Dec. 24.

"Gift buying no longer happens on just one day or in just one way," said Scott McCall, senior vice president of toys and seasonal merchandising for its Wal-Mart U.S. division in a statement. "We're seeing more customers shopping across the season while visiting both our store and online aisles."