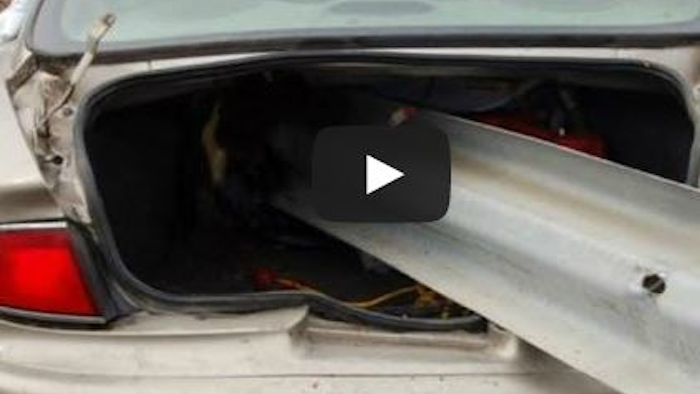 Trinity stopped shipments of its ET-Plus guardrails last week after a Texas jury ordered it to pay at least $175 million for misleading regulators. A whistleblower says the company changed the guardrails' design but didn't inform regulators for several years.

Critics say that when vehicles strike the guardrail ends, the guardrails don't crumple as they should, but instead become spears that impale cars and their occupants.

Trinity has said that since it introduced the ET system in 2000, it has met all federal testing standards.

Virginia banned the use of Trinity's products after the company missed a deadline last Friday to submit plans for additional crash testing. Trinity's request for an extension was denied, the newspaper said.

"We can't have an unapproved product on our roadways," Herman said. "We're working as we speak on a plan for removal."

The Federal Highway Administration has told Trinity to submit a plan by Oct. 31 for new safety testing on the guardrails or lose eligibility for federal reimbursements. States that buy and install the guardrails seek reimbursement from the federal government to cover costs.

"If the crash test data comes back, and shows it's a safe product, we'll stop the removal," Herman said. "But we felt it was not prudent to wait any longer."

Trinity spokesman Jeff Eller said the company is moving to begin the testing requested by Virginia and the FHA.

"We do not believe it would be appropriate for any state to remove a product that has met all tests previously requested by the Federal Highway Administration," Eller said.

Thirteen other states have removed the guardrails from their lists of qualified products. The newspaper said Virginia would be the first state to remove existing guardrails.