General Motors Co. expects its sales in China this year to top 3.1 million vehicles and sees no impact on business from an anti-monopoly probe of the industry, the president of the automaker's China unit said Wednesday. Sales growth for GM and its Chinese partners should be... 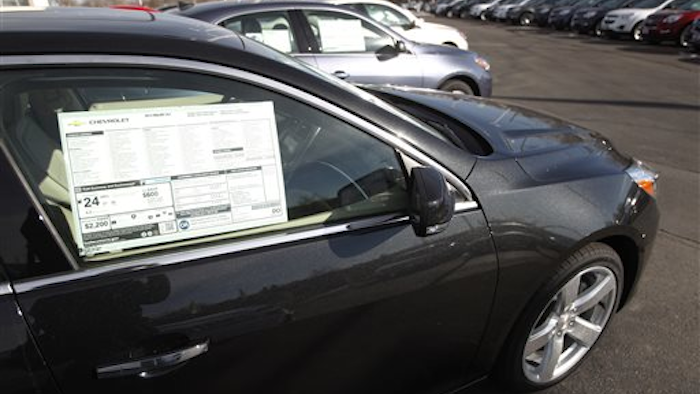 General Motors Co. expects its sales in China this year to top 3.1 million vehicles and sees no impact on business from an anti-monopoly probe of the industry, the president of the automaker's China unit said Wednesday.

Sales growth for GM and its Chinese partners should be slightly ahead of total market growth which is forecast at 8 to 10 percent, Matt Tsien told reporters.

GM and other global automakers are looking to China, the world's biggest auto market by number of vehicles sold, to drive revenues and are investing heavily to appeal to Chinese tastes.

GM sales in China should exceed last year's 3.1 million vehicles, Tsien said, though he said he didn't know what the total would be. Last year's sales grew by 11.4 percent over 2012.

China's auto market has cooled as the economy slowed this year, with sales growth tumbling from 13.9 percent in May to 8.5 percent in August.

Tsien's optimistic comments come in the midst of a sweeping investigation of the auto industry by anti-monopoly regulators.

Regulators have not accused GM of wrongdoing.

Tsien said GM has responded to government requests for information but did not consider it an investigation.

"It has no impact on our business or operations," he said.

Also this year, GM's total sales in China since production began in Shanghai in 1999 should reach 20 million, Tsien said.

Sales by the Cadillac luxury unit should rise to about 70,000 vehicles this year, he said.

The government announced rules last week aimed at lowering prices for spare parts by requiring automakers to allow them to be sold through other retailers. Buyers have complained automakers abuse their control over supplies of parts to charge excessive prices.

An official cited earlier by the government's Xinhua News Agency said prices charged by Mercedes for spare parts were so high that purchasing the components used to make one Mercedes C-class car would cost the equivalent of 12 vehicles.

Asked whether dealers had expressed any concern about the future of their relationship with GM, Tsien said, "No, no."