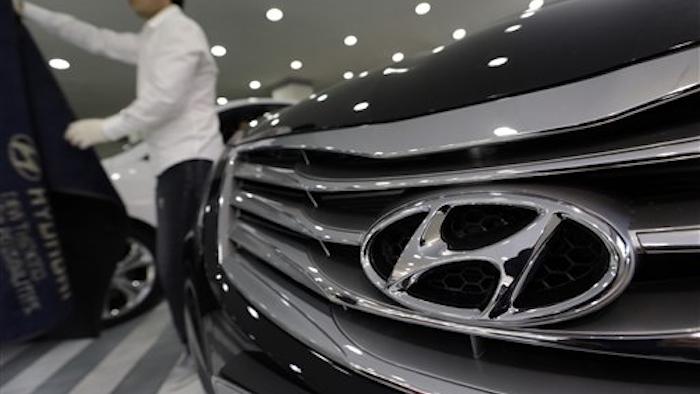 The defect involves corrosion in critical brake system components that can reduce braking effectiveness and increase the risk of a crash, NHTSA said. Hyundai was aware in 2012 that brake fluids used in the model year 2009-2012 Genesis cars did not sufficiently inhibit corrosion in key components of the vehicle's brake system, the agency said,

But rather than issue a recall, Hyundai instructed dealers to change the brake fluid in affected vehicles without explaining the consequences that failure to take that action might have, NHTSA said. Hyundai also did not inform Genesis owners of the potential safety consequences, the agency said.

Hyundai recalled 27,500 of the cars in October 2012 just hours before the government opened an investigation.

"Hyundai failed to act to protect their customers and others that were harmed in an accident, and must change the way they deal with all safety related defects," David Friedman, head of the safety administration, said in a statement.

About 70 percent of the affected Genesis cars have been repaired so far, the safety administration said.

"In order to mitigate a situation like this in the future, Hyundai is instituting new organizational and process improvements, and enhancing the ability of its U.S. leadership team to readily respond to regulatory reporting requirements," he said in an email.

In May, the safety administration slapped General Motors with a record $35 million fine Friday for taking more than a decade to disclose an ignition-switch defect in millions of cars that has been linked to at least 13 deaths. Earlier this year, after a four-year criminal investigation, the Justice Department made Toyota pay $1.2 billion for concealing unintended acceleration problems from NHTSA. No individuals were charged with a crime.