United Auto Workers leaders said they have reached a "consensus" with Volkswagen and expect the German automaker to recognize the union if they sign up enough workers at a new local for the company's assembly plant in Tennessee. 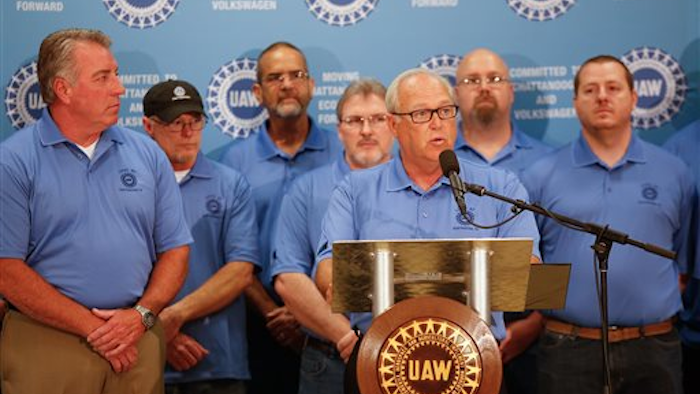 NASHVILLE, Tenn. (AP) -- United Auto Workers leaders said Thursday they have reached a "consensus" with Volkswagen and expect the German automaker to recognize the union if they sign up enough workers at a new local for the company's assembly plant in Tennessee.

The union in February suffered a bitter setback in its effort to organize its first foreign-owned plant in the South when workers at the Chattanooga plant rejected UAW representation by a 712-626 vote.

Gary Casteel, the UAW's secretary-treasurer, said the creation of Local 42 will avoid the need for another election that could involve the sort of "third-party interference" the union blames for losing the earlier vote. He stressed that no employee will be required to join, and that no dues would be collected until after a collective bargaining agreement is reached.

"We have a consensus," Casteel said. "This is not something the UAW is doing unilaterally, it's been thoroughly discussed with VW over an extended period of time."

Casteel said the union is confident Volkswagen will recognize the union if the local signs up a "meaningful portion" of Volkswagen's work force in Chattanooga, though he did not elaborate on what the threshold would be.

Volkswagen wants to introduce a German-style works council at the plant to represent both salaried and blue-collar workers, but the company's has said it can't do so without the involvement of an independent union.

Volkswagen spokesman Scott Wilson issued a statement saying that the company has "no contract or other formal agreement with UAW on this matter."

"Just like anywhere else in the world, the establishment of a local organization is a matter for the trade union concerned," according to the company.

Republican Gov. Bill Haslam and his staff understand "that there is no agreement between the company and the UAW," Haslam spokesman David Smith said in an email.

The union said before the vote that it had signed up a majority of plant workers, but nevertheless lost the contentious election following public statements from GOP politicians warning that a UAW win could imperil economic incentives for the plant's expansion.

The union filed — but later abandoned — a challenge of the outcome with the National Labor Relations Board.

The turmoil surrounding the labor vote has delayed a Volkswagen decision on whether to build a new midsized SUV in Chattanooga or in Mexico. The new model is seen as key to reviving flagging VW sales in North America.

It's unclear whether Thursday's UAW announcement could affect renewed efforts to negotiate expansion incentives at the plant. The money would have to be approved by the Republican-controlled state Legislature, which is heavily anti-union.

The Beacon Center of Tennessee, a conservative think tank, criticized the UAW announcement and said it will call on state lawmakers to reject incentives for VW.

"VW ignored workers' decision to reject the union, inviting the UAW in anyway," Beacon CEO Justin Owen said. "It doesn't deserve a penny of our money."

Documents leaked after the union vote revealed that Tennessee had sought to tie a $300 million incentive offer for expanding the plant to what it deemed a "satisfactory" outcome of the labor situation there.

U.S. Sen. Bob Corker, R-Tenn., and a former Chattanooga mayor, was particularly vocal during the union vote, predicting the company would announce an expansion within two weeks of workers rejecting the union. The senator later blamed the UAW appeal — and the resulting delay in certifying the results of the union election — for putting a hold on expansion talks at the plant.

The Chattanooga plant has been seen as the union's best chance to win in the South because other automakers have not been as welcoming to organized labor as with Volkswagen. Labor interests make up half of the supervisory board at VW in Germany, and they have questioned why the Chattanooga plant is the company's only major factory worldwide without formal worker representation.