A New York auto museum is ready to take the wraps off a Frank Lloyd Wright-designed gas station that didn't make it off the drawing board during the architect's lifetime. 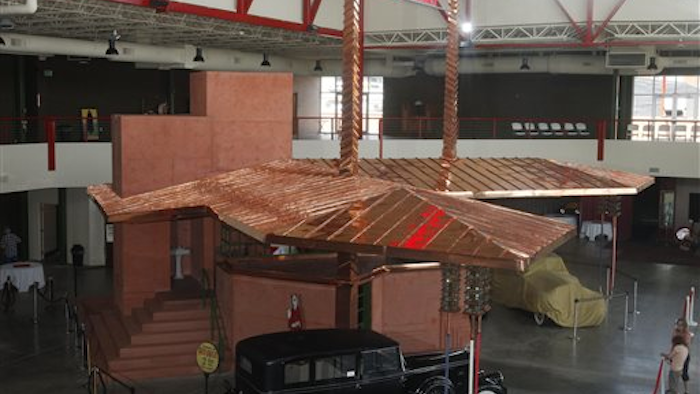 The architect never saw his idea leave the drawing board after demanding an architectural fee equal to the cost of building it.

But on Friday, the Buffalo Transportation/Pierce-Arrow Museum cut the ribbon on the Wright-designed station it built from the plans, with Wright's own convertible parked out front as if awaiting a fill-up.

"In 1927, you had a gas pump and an outhouse," museum founder James Sandoro said, contrasting the filling stations of the times with the luxury version Wright designed for a nearby Buffalo intersection.

The non-working station was built inside a 40,000-square-foot addition to the museum to protect it and its visitors from the elements. Two 45-foot copper poles that Wright called totems rise from the floor through a copper cantilevered roof typical of Wright designs. To avoid pump islands, Wright proposed putting the gas overhead in gravity-fed tanks, a setup — especially with fireplaces underneath — that wouldn't pass safety codes today.

In his writings, Wright called his station "an ornament to the pavement," said Sandoro, who acquired the rights to build it 11 years ago from the Frank Lloyd Wright Foundation in Scottsdale, Arizona.

Eventually, Wright would design and help build one working filling station, in Cloquet, Minnesota. The station, opened in 1958 with a glass-walled observation lounge and copper canopy similar to what Wright envisioned 30 years earlier, remains open today.

Construction of the Buffalo filling station was praised by tourism officials who see it as a draw for both fans of Wright, who died in 1959, and car buffs. The museum, which received $6.3 million from New York state for the expansion, is filled with transportation artifacts and also honors the Buffalo-made Pierce-Arrow automobile that in the early 1900s served as the official car of the White House.

Wright's 1929 L-29 Cord Cabriolet is on loan from the Auburn, Cord Duesenberg Museum in Auburn, Indiana.

The filling station is the third Wright structure to be built in Buffalo using designs not realized during his lifetime. The Blue Sky Mausoleum, believed designed in the mid-1920s, opened in Forest Lawn Cemetery in 2004, and the Fontana Boathouse, designed in 1905, opened in 2007.