"Chinese manufacturers are managing to improve their product quality and design quickly and make them almost comparable to international brands while keeping their price much lower," said industry analyst John Zeng of LMC Automotive. 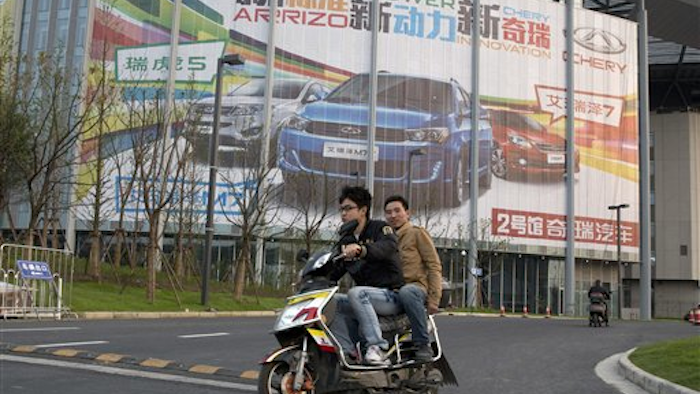 Chinese auto brands, pressed by foreign competition, are enjoying a rebound as they head into next week's Shanghai auto show, their biggest marketing showcase of the year.

For two years, new but ambitious automakers including Geely and Chery steadily lost market share to U.S., European and Asian rivals. They responded by spending heavily to create a wave of new models — a strategy that finally is paying off. Geely, owner of Sweden's Volvo Cars, says the number of vehicles sold under its own brand jumped 57 percent in the first quarter.

"Chinese manufacturers are managing to improve their product quality and design quickly and make them almost comparable to international brands while keeping their price much lower," said industry analyst John Zeng of LMC Automotive.

The revived momentum for Chinese automakers adds to pressure on General Motors Co., Volkswagen AG and other global brands that see China's crowded market as their future at a time when sales growth is slow in the United States and stalled in Europe.

Automakers are plowing money into developing vehicles to Chinese tastes and to sell more in the populous countryside. Producers including Nissan Motor Co., VW and Mercedes Benz see the market as so important they increasingly are breaking with the industry tradition of selling the same vehicles everywhere and are creating China-only models.

"Nothing — and we mean nothing — matters more to the global auto industry than China," said Bernstein Research in a report in January.

The intensity of that competition is reflected in the huge scale of displays planned by dozens of U.S., European, Japanese, South Korean and Chinese automakers for Auto Shanghai 2015.

Nissan, which is counting on China to help drive a global turnaround, plans to unveil the Lannia, a mid-size sedan the company calls its "first product specially created for the youth generation in China."

Volkswagen, competing with GM for the title of China's most popular vehicle brand, plans to debut a new model designed for this country. BMW AG, Europe's biggest luxury brand, is unveiling its X5 xDrive40e Sports Activity Vehicle, a plug-in hybrid.

Geely will display its Borui sedan, a flagship model of the Chinese resurgence.

The Borui includes technology from Volvo, Australia's Prodrive and Belgian company LMS. Geely got its start manufacturing scooters in 1994, bought Volvo from Ford Motor Co. in 2010 and also owns the producer of London taxi cabs. The company says the Borui is a sign it has become a "true international car brand in terms of design."

"That basically is providing the market with a mid-size car at the price of a compact car," he said.

Other new Chinese models due to be shown are a similar marriage of local and Western technology and design.

Changan Automobile Co., the local assembly partner of Ford Motor Co., plans to show its own CS95 SUV, a product of the company's Italy-based design studio. Britain's MG, owned by Shanghai Automotive Industries Corp., the local partner of GM and VW, is displaying its first SUV, the GS.

Other Chinese automakers have reported similar double-digit sales gain this year, helped by a 46 percent surge for lower-priced locally made SUVs.

Those gains boosted the total share of the light vehicle market for Chinese brands so far this year to 43 percent from last year's 38 percent, according to LMC.

Chinese brands that already export to Africa and South Asia are stepping up efforts to break into developed markets.

Geely's Volvo unit is preparing to export S60 Inscription sedans to the United States from a factory in China's southwest this year. They would be the first Chinese-manufactured autos sold for street use in the United States.