The company said it will send letters to owners of vehicles in the expanded recall "over time" as replacement parts become available. 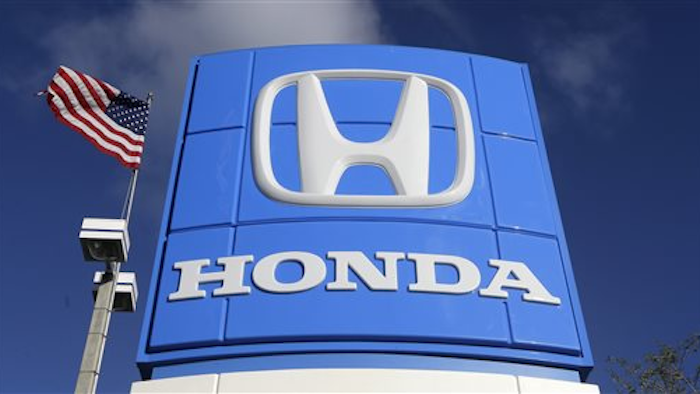 Honda is adding nearly 105,000 vehicles to its growing U.S. recall of driver's side air bag inflators that can explode with too much force.

Honda said that it's the first recall of 2008 Pilots for potential problems with driver's air bags made by Takata Corp. of Japan. The inflators can blow apart a metal canister and spew shrapnel into drivers and passengers. At least six people have died worldwide due to the problem.

Dealers will replace the driver air bag inflators for free. With the added vehicles, Honda has now recalled 5.5 million Honda and Acura cars and SUVs nationwide from the 2001 to 2011 model years because of the air bag problems.

So far, 10 different automakers have recalled over 17 million cars and trucks in the U.S. and 22 million worldwide because of the air bag problem. There could be as many as 30 million vehicles with Takata air bags across the U.S.

Honda said in documents posted Thursday by U.S. safety regulators that it found the additional vehicles by checking Takata inflator part numbers against Honda vehicle identification numbers in its factory records. Some 2001 Accords and 2004 Civics already were included in a recall from last year.

After announcing the driver's side recall last year, Honda started checking part numbers, spokesman Chris Martin wrote in an email. "The process required a significant amount of time to cross-check large databases, but helped to assure that each vehicle had been identified," he wrote.

Honda has no new reports of inflator ruptures related to the recall expansion, and has no reason to believe further expansions will be needed, Martin wrote.

The company said it will send letters to owners of vehicles in the expanded recall "over time" as replacement parts become available.

Takata uses ammonium nitrate to create a small explosion that quickly inflates its air bags. But government investigators say the chemical can burn faster than designed if exposed to prolonged airborne moisture. That can cause it to blow apart a metal canister meant to contain the explosion. Automakers, Takata and the government all want to find out just how much humidity and time it takes to cause the problem, both of which are unknown.

Takata, NHTSA and the auto industry are investigating to figure out just how much humidity over how much time can cause the problem to happen.

The 10 automakers, fed up with slow progress by Takata in finding the cause, hired a Virginia rocket science company to investigate the matter. Orbital ATK has the ability to quickly simulate the impact of humidity on chemicals over long periods of time.

NHTSA began fining Takata $14,000 per day on Feb. 20 for allegedly failing to fully cooperate in the government's investigation. The fines have grown to $392,000 as of Thursday. The Justice Department also is investigating Takata for possible criminal prosecution. The company has known about the air bag problems since at least 2004.